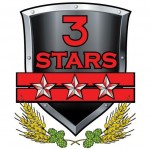 “We have developed a vital and vibrant market in D.C. and see the opportunities with Premium that would provide for our continued growth,” said Dave Coleman, President, 3 Stars Brewing Company.

“We are extremely excited to be partnering up with 3 Stars brewing. They have a knack for using fresh local ingredients and pushing the boundaries of beer styles, while making sure that quality is always number one. The DC landscape is made up of some amazing restaurants and bars, the local beer scene is no different. Craft consumers put a priority on supporting home town and regional offerings- this in turn creates a tight knit community which helps fuel the growth of the local brewing scene. We are expecting 3 Stars to become a major player in the market for years to come,” said said Ryan Curley, Craft Sales Manager for Premium of Washington DC.

3 Stars Brewing Company was established in 2009 and has had beer in the D.C. market since August of 2012. With this distribution partnership, their products will now be available in both VA & D.C. The owners, Dave Coleman & Mike McGarvey started the brewery with a focus on complex ales of the highest caliber. They have released over 40 different styles of beer in their first 2 years, and have been named Washington City Paper’s Best Local Brewery two years in a row (2013, 2014).