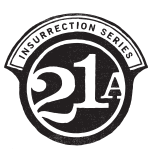 SAN FRANCISCO — The hop crisis may be over for now, but the hop syndicate is still trying to control the market in the face of booming growth in the craft beer industry. Ex-cons Nico and Shaun still have a few tricks up their sleeves from doing hard time on the Rock.

Hiding out Down Under, they discover some new hops that the syndicate can?t touch. Gloating on Sydney?s Bondi beach, Nico lights up a cigar. “Uh, you can take off the dress now, Nico,” Shaun remarks as he pours himself another Hop Crisis.

For the third year running, 21st Amendment Brewery announced the release of Hop Crisis, a big, hoppy, oak-aged Imperial IPA that is packed with five different hop varietals. Hop Crisis was created in defiance of the 2007 hop shortage at a time when many brewers were forced to skimp on hops. This year the formula adds new dry hops in the form of New Zealand Motueka and Australian Stella blended with Northwest Cascade hops.

21st Amendment co-founder and Brewmaster Shaun O?Sullivan says of the idea behind the beer, “The oak aging and intense hop bitterness make this a big beer that also has subtle layers of flavor. We think that thanks to the dry hop varietals, some new tropical and citrus flavors emerge to please the palate again this year. With an ABV of 9.7%, it is best enjoyed sipped from a Belgian style tulip snifter.”

Hop Crisis is part of 21st Amendment?s Insurrection Series, a limited edition, once-in-awhile, four-pack release of a very special beer that rises up in revolt against common notions of what canned beer can be.

Hey, we?re Nico & Shaun. We live for great beer. When we opened the 21st Amendment Brewpub in San Francisco in 2000, we vowed to do things differently. To us, the 21st Amendment means much more than just an end to Prohibition. It means the right to brew beer, the freedom to be innovative, and the obligation to have fun.