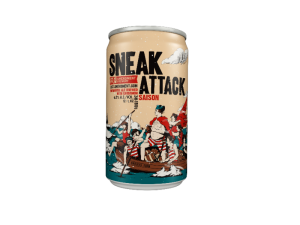 San Francisco, CA – You might not expect a Saison in winter any more than the enemy expected Washington to cross the icy Delaware. So with a boatload of bravado, the 21st Amendment Brewery is sneaking up on winter and attacking it with the flavors of summer.

Co-founder and Brewmaster Shaun O’Sullivan says, “While this is the time of year when brewers are typically introducing strong, heavy beers, we wanted to brew up a bit of a surprising alternative, essentially an antidote to winter. At 6.2% ABV with 38 IBUs, it drinks light and refreshing but really has some heat behind what is seemingly a tame beer.”

Co-founder Nico Freccia added, “We had a great time with the art for this beer. George Washington, shirtless with a beer gut, leading a ragtag band of guys in brightly striped swim shorts across the river in a snowstorm. How cool is that? And the beer pairs equally well with the rich and warming foods of winter as it does with pizza and wings at game time.”

Sneak Attack Saison will be available from January through March 2014 in cans (6-packs) and on draft at bars and stores in all seventeen of 21st Amendment’s distribution territories, including CA, OR, WA, AK, ID, MN, OH, MA, NY, NJ, DC, MD, DE, PA, VA, GA and NC. For up to date availability, events and promotions, visit 21A’s website atwww.21st-Amendment.com.