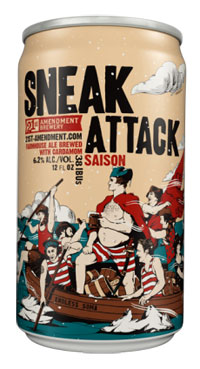 SAN FRANCISCO, CA — If you were going to sneak across the Delaware River unnoticed, you might not consider doing it in a boat full of guys in brightly striped swim shorts waving flags. In winter. With George Washington.

But then again you’re probably not 21st Amendment Brewery, the bold minds behind the newest farmhouse-style Saison to hit bars and store shelves: Sneak Attack.

Co-founder and Brewmaster Shaun O’Sullivan says, “While this is the time of year when brewers are typically introducing strong, heavy beers, we wanted to brew up a bit of a surprising alternative that essentially says, ‘in your face, winter!’ At 6.2% ABV with 38 IBUs, it drinks light and refreshing but really has some heat behind what is seemingly a tame beer.”

Co-founder Nico Freccia added, “You might not expect a Saison in winter any more than the enemy expected Washington to cross the icy Delaware. But winter needs an antidote. With a boatload of bravado, we’re doing our part to bring summer to winter. And Sneak Attack pairs perfectly with the rich and warming foods of winter: Bouillabaisse, sausages, smoked meats, full flavored cheeses and anything spicy.”

Sneak Attack Belgian-style Saison will be available from January through March 2013 in cans (6-packs) and on draft at bars and stores in all seventeen of 21st Amendment’s distribution territories, including CA, OR, WA, AK, ID, MN, OH, MA, NY, NJ, DC, MD, DE, PA, VA, GA and NC. For up to date availability, events and promotions, visit 21A’s website at www.21st-Amendment.com.

Q: Tell us about Sneak Attack, your newest seasonal beer just released in time for the darkest days of winter.

Nico Freccia (NF): Sneak Attack replaces Bitter American as our winter seasonal. When we took Bitter American to a year round beer last spring, we needed something special to fill its shoes.

Q: Why a Saison, typically a summer beer, in winter?

SOS: This is normally the time of year when brewers are introducing strong, heavy beers, the “winter warmers”. And we drink a lot of those beers and they are amazing. But your palate gets fatigued and you really need to have an option to just break it up. So we thought this would be the perfect “antidote” beer.

NF: We like to be a bit contrarian and we really had an aha moment when we realized that the perfect beer to do in the dead of winter would be a quintessentially summer beer. A delicious, refreshing, dry summer beer to enjoy in winterÔÇªand something completely different from other winter beers.

Q: How did you come up with the spice notes in Sneak Attack? You use whole organic cardamom pods.

NF: That’s right. It started as a homebrew recipe using fresh spicy, peppery greens from my garden. It was the heat of summer and you could actually smell the pepper in the greens as you walked by and I just thought it would be a perfect addition to a traditional Saison.

SOS: The style traditionally has a lot of spice notes that naturally occur from the Belgian yeast. Brewers have experimented with various ingredients, from dandelion to black pepper, to help complement those notes. We wanted to do something a little different that would draw out the natural esters in the yeast to really accentuate the aromas and flavor without overwhelming it. We did a bunch of experimentation and we found that the cardamom pod was just subtle enough and just different enough that it really helped make a balanced, but complex, beer.

NF: To me the cardamom brought out the lemon rind and fresh cut hay aromas that were already in there. And we wanted to brew a very dry style Saison so this paired perfectly.

Q: What’s the story behind the name?

NF: We’ve had a lot of fun playing with some well known iconic American images. And the famous painting of Washington crossing the icy Delaware with his ragtag crew fighting off little icebergs was the perfect embodiment of winter. So we thought, let’s throw a beer in George’s hand, put some swimsuits on everyone and bring a little summer to winter.

SOS: So the name came out of this idea that we were sneaking up on winter and attacking it with a dose of summer. Which is unexpected. Like Washington crossing the Delaware.

Q: Anything else you’d like to add about this beer?

SOS: Drink it. It’s good. It will make you happy and solve all your problems.