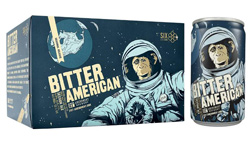 SAN FRANCISCO, CA – 21st Amendment rings in the New Year with great news for craft beer lovers everywhere. Days after it was named one of the “Top 10 Beers of 2011” by the Washington Post, the popular winter seasonal Bitter American is being brought back, but this time as a year-round offering.

“People were “Bitter” when we ran out last year. Yep I said it, Bitter!,” said 21st Amendment Brewery co-founder Nico Freccia. “We got so many emails and tweets asking us to make this a year-round beer, we just couldn’t ignore them. It’s the perfect antidote to the big beers of winter and also the perfect summer brew.”

“Bitter American is a great beer during colder times when strong beers seem to be pretty prevalent,” added founder and Brewmaster Shaun. “When we first brewed this beer it really scratched the lower-alcohol-session-beer-itch that I would get when I was tired of drinking barley wines, imperial stouts and other stronger hoppy beers. I wanted and I think a lot of good beer drinkers want a session beer where you can enjoy a few pints of a beer with huge flavor but without all the alcohol. Bitter American is a mere 4.4% ABV. It’s got all the flavor and you can keep moving.”

If you’d been rocketed into space against your will, you might be a little bitter too. Bitter American is our long-overdue tribute to unsung, unwitting heroes everywhere. This American session ale packs a lot of hop and malt flavor into a refreshingly lower-alcohol brew, making it the perfect beer to have on hand when you have history to make.

“The amazing thing about brewing Bitter American is achieving a balance between malt flavor and hops,” says O’Sullivan. “Our secret is the use of a special, imported English heirloom malt called Golden Promise. This malt has a rich, full body and distinctive flavor that gives the beer a complex, light caramel and toasty flavor. It sets up a nice firm malt backbone allowing us to hop up the beer for incredible aromas and flavors without over bittering the beer.”

Bitter American is available in cans and on draft starting this week at quality bars and stores in all 16 of 21st Amendment’s current distribution territories, including CA, OR, WA, AK, ID, MN, OH, MA, NY, NJ, DC, MD, PA, VA, GA and NC.

Who the heck are these guys? Hey, we’re Nico and Shaun. We live for great beer. In 1920, there were thousands of breweries across America making unique handcrafted beer. The passage of Prohibition wiped out this great culture. After thirteen years without beer, the states ratified the 21st Amendment, ending Prohibition in America. At the 21st Amendment Brewery, we celebrate the right to brew beer, the freedom to be innovative, and the obligation to have fun. Visit us on the web at www.21st-Amendment.com