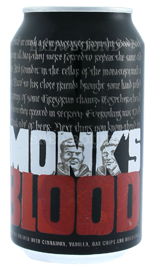 San Francisco, CA — After two years in seclusion, 21st Amendment Brewery’s acclaimed beer Monk’s Blood is now available for a limited time. Monk’s Blood’s most ardent worshippers may want to drink one now and cellar one for later before the craft beer once again disappears with monk-like mystery at the end of May. Brother Shaun (Brewmaster and co-founder Shaun O’Sullivan) said, “Back in 2009, this was my brainchild and a most prized creation that we knew had to be our first specialty offering in a can.”

Monk’s Blood is an 8.3% alcohol, dark Belgian-style ale brewed with eight malts, Belgian candi sugar, cinnamon, vanilla bean, dried local black mission figs and aged on oak for a flavor unlike anything you’ve ever had from a can. It is part of 21st Amendment’s Insurrection Series, a limited edition, four-pack release of a very special beer that rises up in revolt against common notions of what canned beer can be.

Brothers Nicolas (co-founder Nico Freccia) and Shaun developed the beer as an homage to the monks of Belgium’s monasteries who have been brewing some of the world’s great beer for centuries. “During times of fasting, the monks subsist solely on beer, which they refer to as ‘liquid bread’,” notes Brother Nicolas. “Beer, quite literally, is in their blood.” Freccia and O’Sullivan traveled to Belgium to develop the recipe for this special beer, visiting small, traditional breweries in the hop fields of west Flanders, not far from the famous Trappist abbey of Westvletren.

In 2000, Freccia and O’Sullivan opened the doors to the 21st Amendment brewpub in San Francisco’s historic South Park neighborhood with Freccia managing the restaurant and O’Sullivan spearheading the brewing process. In addition to quickly becoming one of the city’s favorite pubs, 21st Amendment began expanding beyond the Bay Area by helping to pioneer the movement to canned craft beer. Known for their witty names and delicious brews, 21st Amendment offers three year round selections, as well as seasonal offerings and their infamous ‘Insurrection Series’, a once-in-a-while limited edition release. Today, 21st Amendment is among the top 50 craft beer brewers in America and is sold in 17 states.