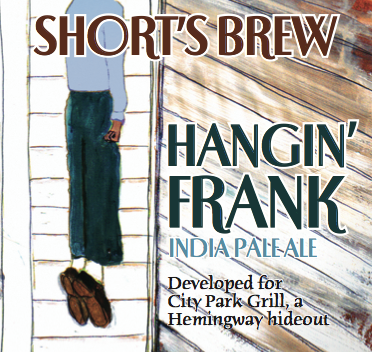 BELLAIRE, MI – After receiving some very heartfelt communications regarding our much loved seasonal beer named Hangin’ Frank, Short’s has decided to rebrand this beer for next year. The rebranding will keep the beer exactly the same, but with a new name and new artwork.

For anyone wondering why we have a beer called “Hangin’ Frank” in the first place, it involves the legend and folklore of the City Park Grill in Petoskey, which is the restaurant that inspired this particular beer.

We regret any pain that this beer name and artwork has caused, and appreciate your understanding!

Hangin Frank was one of Shorts first beers and was made and named for the City Park Grill in Petoskey. Here is an excerpt from the Petoskey news explaining why Frank is Hangin:

It is said that the ghost of Frank Fochtman, former owner of the City Park Grill in Petoskey, haunts the establishment today. Manager Jason Septic said it is rumored that Fochtman hung himself in the basement, when it was named Grill Cafe. ”I know many people who’ve just had a weird sensation or feeling that there’s someone else down there,” he said, adding that his hair has stood up on the back of his neck on occasion when down in the basement.

The ghost has on occasion been blamed for broken glasses, when they would just snap as they sat on the table. ”They seemed to, when just sitting on the table, break where the stem meets the glass,” Septic recalled. However, despite some broken stemware, Fochtman — commonly just called Frank by the staff — does not seem to have a mean or negative presence. ”My personal feeling is that he’d be here, just watching over the place,” Septic said.