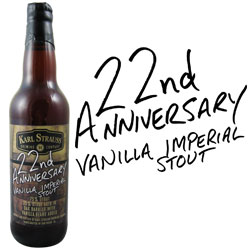 The brewery will host an inaugural event, the "Changing of the Barrels," at the main brewery in Pacific Beach on February 2nd. This event will kick off the company's new anniversary barrel-aging series, offering the public an exclusive chance to taste the 22nd Anniversary beer unblended, side by side with the blended version that will be released later in the month.

This year’s 22nd Anniversary beer is a Vanilla Imperial Stout, with a portion aged in bourbon barrels for nine months.  The barrel-aged beer was then blended with a fresh batch of stout, along with the addition of fresh split Madagascar vanilla beans. This brew checks in at 8.5% ABV and is described by Karl Strauss as a "sipper," and ideal for dessert or after dinner drink.

Guests will also be the first and only to taste the 23rd Anniversary brew before it goes into barrels for 12 months.