Deschutes Brewery is heading to Columbus with its pop-up pub of epic proportions!

Deschutes Brewery is heading to Columbus with its pop-up pub of epic proportions setting up shop on Saturday, July 9 from 2 – 10 p.m. at Genoa Park. The ultimate craft beer block party, this 402-foot custom bar will be pouring beers from 60 taps, including a guest tap from local Land Grant Brewing. We’ll pair these beers up with culinary creations from our corporate executive chef, Jeff Usinowicz, who is teaming up with local chefs Mike Frame of 101 Beer Kitchen and Mike Suclescy and Chris DeVol of The Thurman Café to create some dishes that complement the many beers being served (think everything from the brand-new summer seasonal Hop Slice Session IPA all the way to the big and bold flavors of Black Butte XXVI, XXVII & XXVIII - a three-year vertical of the imperial Black Butte Porter Anniversary beers).

Local, live music from Mojoflo, The 4ontheFloor, Brave Weather and The Buzzard Kings will help to round out the festivities.

And 100% of the beer proceeds from this event benefit the Mid-Ohio Foodbank and they need your help. If you are interested in volunteering, please click here for details.

This year we’re offering VIP tickets that includes beer tokens, Street Pub swag, and access to the VIP Lounge where we’ll be doing special beer tastings led by one of our brewers.
Purchase your VIP tickets here: https://www.deschutesbrewery.com/events/streetpubcbus/ 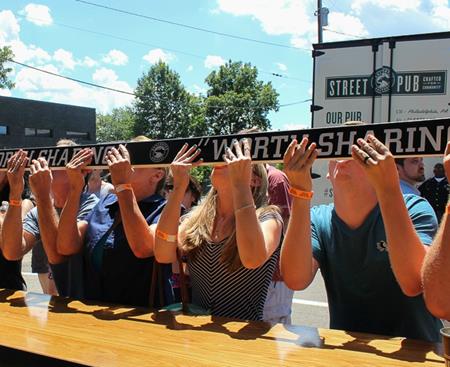