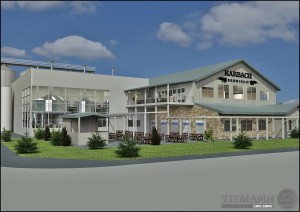 Mindelheim, Germany – Karbach Brewing Company is the first US craft brewer, who decided in favor of a state of the art turnkey brewhouse from Ziemann. As part of the capacity expansion of the brewery, Ziemann will also install a tank farm consisting of six fermentation and storage tanks.

Ziemann International GmbH is located in Ludwigsburg, Germany and is serving the brewery industry since over 160 years, installing brewhouses, fermenters and turnkey breweries all over the world.

Karbach Brewing Company was founded 2011 in Houston, Texas. Since then this craft brewer has been writing a remarkable success story: after two years they already produced 18,000 bbl. For this year a sales volume of 35,000 bbl has been forecast.

At 40,000 bbl per year the current brewhouse reaches the limits of its capacity. Therefore Karbach Brewing Company will expand its production capacity in cooperation with Ziemann with a new brewhouse and tank farm. The project will feature a restaurant area with a prominent view on the showpiece brewhouse from Ziemann.

Eric Warner from Karbach Brewing explained the decision in favor of Ziemann: “Since 2003 Ziemann has been successfully supplying tanks to craft breweries in the USA. The high quality and reliability in combination with the great know-how of the process — from malt handling to bottling — makes Ziemann the ideal partner for us”.

Equipped with the latest innovations for craft brewers:

This Ziemann brewhouse will be producing up to12 brews per day with a cast-out wort volume of 120 bbl and is designed with a special focus on the requirements of the craft brewers, maximum versatility and flexibility. Besides brewhouse and tanks the Ziemann supply includes the automation of the system as well as the integration of the malt handling.

As Eric Warner pointed out, one of the key decision factors was the short installation time due to the very high degree of prefabrication in the Ziemann workshop in Germany. From unloading the vessels to the first brew the installation will be completed within four weeks.

The new tank farm, consisting of six CCTs with a capacity of 600 bbl each, will boost the annual production capacity of the brewery to 100,000 bbl. Ziemann will be responsible for the supply and installation of the tanks, including the catwalk system. The future addition of fermentation tanks will provide a production capacity of more than 300,000 bbl per year. All work in the brewhouse as well as in the cellar area will be completed in the third quarter of 2014.