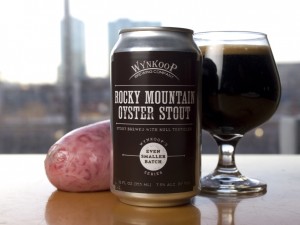 “This is another seminal moment in our 25 years of small-batch liquid art,” says Wynkoop’s Marty Jones.

Rocky Mountain Oyster Stout made its debut during last year’s Great American Beer Festival. The draft-only beer earned press and consumer interest from around the world, including appearances on the Anderson Cooper Live and Today Show programs. The new hand-canned version of Rocky Mountain Oyster Stout will be sold in unique two-packs of labeled 12-ounce cans. It will be available at select retailers in the brewpub’s Denver distribution area.

For beer lovers outside of the Denver area, a limited amount of the beer will be available through the www.letspour.com web site starting March 11.

“We’re certain that this is the ballsiest canned beer in the world,” Jones adds, “and we believe it’s also the nation’s first two pack of cans.”

The beer is made in tiny 8-barrel batches (instead of Wynkoop’s usual 20-barrel batch) and is the first in Wynkoop’s new Even Smaller Batch Series of beers. Head brewer Andy Brown developed the beer’s recipe.

Rocky Mountain Oyster Stout is an assertive, viscous stout with a rich brown/black color, a luscious mouthfeel and deep flavors of chocolate, espresso and nuts. The beer sports a savory, umami-like note and a roasty dry finish. Rocky Mountain Oyster Stout is 7.5% ABV and 3 BPBs. (That’s balls per barrel.) The beer came to life last fall after the enthusiastic response to Wynkoop’s 2012 April Fools Day spoof video in which Wynkoop claimed to have made the beer.

“Folks who got the joke thought it was a hilarious idea,” says Jones, who came up with the video idea and script after sampling a traditional oyster stout. “And many of those who missed the joke were eager to try the beer. We figured the only way we could top the humor of the video and make those stout drinkers happy was to actually create the beer.”

Wynkoop is canning approximately 100 cases of the beer in its initial canning run of Rocky Mountain Oyster Stout. The beer is packaged in plain cans that Wynkoop’s brewers label with a two-part label akin to those used on glass bottles. This method enables Wynkoop to produce super-small batches of canned beer and avoid the 95,000 can minimum for painted cans from its can supplier.