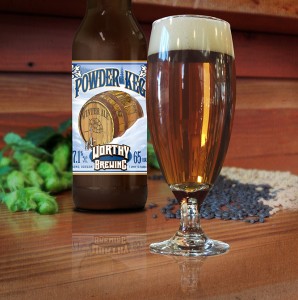 Bend, Oregon — As cold weather approaches, Worthy Brewing Company is releasing their Winter seasonal, Powder Keg Winter Ale. This red-hued festive IPA is loaded with hop flavor and aroma from a double dry hopping with a Centennial/Chinook and Cascade/Columbus combo. Pine and citrus hop characters are balanced by a generous dose of crystal malts. This “winter warmer” will be an aggressive, yet balanced favorite for the colder months.

Powder Keg Winter Ale comes in at 7.1% ABV with 65 IBUs. The October to January release of 22-ounce bottles and kegs will be distributed by Columbia Distribution in Oregon and Washington, Hodgen Distributing in Eastern Oregon, and by Hayden Beverage in Idaho.

Worthy Brewing Company opened its doors in Bend, Oregon in early 2013. Within its first year, a canning line, bottling line, expanded fermentation space, a kitchen expansion, and an addition of a five barrel pilot brew system were completed. Worthy also boasts a greenhouse and hop yard onsite for growing estate and experimental hops in conjunction with Oregon State University and Indie Hops.