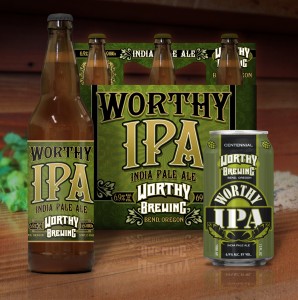 Bend, Oregon – Worthy Brewing Company wants everyone to try the most popular of its flagship beers, Worthy IPA. To satisfy the buying habits of most consumers, the Bend, Oregon brewery is expanding the packaging for the Worthy IPA family to include 22 oz bottles and six pack 12 oz bottles. On the heels of the brewery’s first anniversary, these new packaging options will be joining the current offering of six pack 12 oz IPA cans, which also soon have a new look.

Renowned for his IPAs, Brewmaster Chad Kennedy raised the bar. This clean, crisp, and refreshing beer is amazingly balanced. A tribute to Worthy’s friends at Indie Hops, Worthy IPA is bursting with the finest hops Oregon has to offer: Nugget, Centennial, Meridian, Crystal and Horizon. John Foyston of The Oregonian has even dubbed Worthy IPA as “…the best IPA ever.” The year round releases of the expanded packaging will be distributed by Columbia Distribution in Oregon and Washington and by Hayden Beverage in Idaho.

Worthy Brewing Company opened its doors in Bend, Oregon in early 2013. Within its first year, a canning line, bottling line, expanded fermentation space, a kitchen expansion and the addition of a five barrel pilot brew system were completed. Worthy also boasts a greenhouse and hop yard onsite for growing estate and experimental hops in conjunction with Oregon State University and Indie Hops.