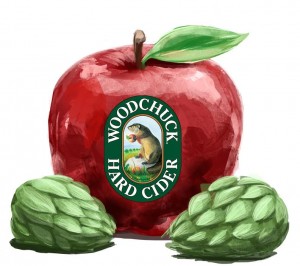 Middlebury, VT – Woodchuck Hard Cider, one of the top selling hard ciders in the United States, has released a new cider available in bars, pubs, and restaurants across the country. The draft-only Woodchuck Hopped Apple is another unique offering from the cider category’s innovation leader.

Hopped Apple features Woodchuck’s original small batch hard cider blended with cascade hops after fermentation. This extensive dry hopping process infuses the cider with rich hop flavor and aroma of crisp citrus and pine. The hops pair perfectly with the natural apple character of the cider. Hopped Apple was first released in the Woodchuck Cellar Series line, but after the overwhelming success of the cider, it is being moved on-premise as a year round offering.

If hard cider were in the craft beer category, it would rank as the third largest style behind IPA and seasonal*. Woodchuck Hopped Apple is a marriage of two top styles, and stands out in the on-premise landscape as a unique beverage that can draw drinkers to the bar in greater numbers. 84% of cider drinkers also drink beer**, and this cider is poised to pull people from both categories.

“Beyond the liquid being delicious, this cider is reaching across the aisle,” says Vice President of Sales Terry Hopper. “Craft beer drinkers have a passion for trying new things, and this cider provides a natural crossing point in the river between beer and cider.”

Woodchuck Hard Cider is a hard cider handcrafted with apples. Woodchuck Amber was developed in a Proctorsville, Vermont garage in 1991. Its recipe and creator, Greg Failing, remain at the core of the product. Woodchuck Hard Cider now operates in a state-of-the-art cidery in Middlebury, Vermont, and its lineup of styles has grown to include a variety of seasonal and limited releases. Distribution, which started in a single Vermont country store, now stretches across all 50 states. The Woodchuck family is dedicated to providing exceptional quality and premium taste in every bottle. A naturally gluten-free beverage, Woodchuck Hard Cider lends itself well to food pairings and recipes. More information is available atwww.woodchuck.com.