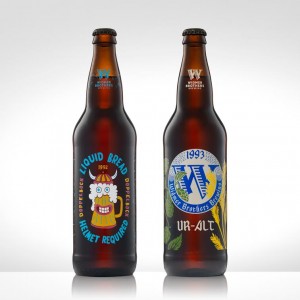 PORTLAND, Ore. — The 30 Beers for 30 Years Series keeps rolling today as Widmer Brothers Brewing announces the ninth and tenth beers in the series. Doppelbock and Ur-Alt are being released and represent the years 1992 and 1993, respectively, in the brewery’s 30-year history.

Doppelbock is a traditional strong German-style lager that uses heavy portions of dark malts. Although the beer is traditionally brewed for the winter months, Widmer Brothers is re-releasing Doppelbock in July as the beer appeared in the brewery’s history in 1992. The beer has been brewed by Widmer Brothers periodically for over 20 years, and Rob Widmer likens the brew to “liquid bread.” Fans of German lagers will welcome this release, but note it is not for the faint of heart — as Kurt and Rob say, “helmet required.”

Ur-Alt is a legend in the history of Widmer Brothers because it replicates the very first batches of Altbier ever produced by Kurt and Rob in the earliest days of the brewery. Before they perfected Alt, a few batches were much more bitter than intended. The unintended bitterness was embraced, and the beer geeks of Portland asked Kurt and Rob to try and reproduce the original batches. They did, and the resulting recipe was called Ur-Alt. It is now being released in bottles for the first time.

Both beers will be available throughout July and early August in the Portland area only. Like all beers in the 30 Beers for 30 Years Series, an extremely limited quantity of each beer was brewed and packaged with custom labels for sale in 22-ounce bottles and on draught.

Each beer in the 30 Beers for 30 Years Series features unique label art from 30 different local artists and designers. Portland artist Will Bryant created the Doppelbock label, and the creative team at Portland design and letterpress studio Print and Grain created the Ur-Alt label.

To see the labels and learn more about the artists and the project, please visit www.30beersfor30years.com.

Doppelbock is our classic winter warmer. We’ve brewed this Widmer Brothers’ favorite off and on, on draught only, ever since it was first introduced in 1992. Rob Widmer is fond of saying this beer is like “liquid bread,” and notes there is a rule when drinking it: “helmet required.” It is not for the faint of heart. 8.5% ABV

The beer geeks of Portland demanded that Kurt and Rob Widmer try to replicate some of the original batches of Alt, which were much more bitter than ever intended (of course Portland beer fans wanted more hopsÔÇªtypical!). Ur-Alt was created out of that challenge, and the beer is still a legend around these parts. 4.7% ABV, 60 IBU

Founded in 1984, Widmer Brothers Brewing is celebrating 30 years of beer in 2014. Founders Kurt and Rob Widmer helped lead the Pacific Northwest craft beer movement in 1984 when, in their 20s, they began brewing unique interpretations of traditional German beer styles. In 1986, Widmer Brothers Brewing introduced the original American-style Hefeweizen, which elevated the brewery to national acclaim. Since then, the brewery has continued to push the boundaries of craft beer, developing a variety of beers with an unapologetic, uncompromised commitment to innovation.ÔÇ¿ÔÇ¿Based in Portland, Ore., the brewery currently brews a variety of beers including Alchemy Pale Ale, Upheaval IPA, Hefeweizen, Drop Top Amber Ale, a full seasonal lineup, and a series of limited edition beers. For more information about Widmer Brothers Brewing, visit www.widmerbrothers.com. ÔÇ¿