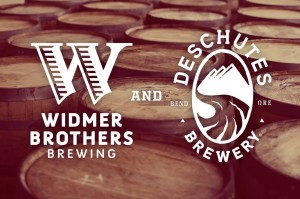 PORTLAND, Ore. – Two of Oregon’s craft beer pioneers, Widmer Brothers Brewing and Deschutes Brewery, came together to brew a unique collaboration beer, AltBitter. The collaboration is part of a yearlong celebration of Widmer Brothers’ 30th Anniversary and an example of the great camaraderie in the Oregon craft brewing scene. AltBitter is inspired by two of the first recipes from each brewery and is available now in select markets across the country.

AltBitter is a unique blend of two favorites from the pioneering breweries: Deschutes Brewery’s Bachelor Bitter and Widmer Brothers Brewing’s Altbier. Imperial versions of both classic beers were brewed and aged separately in rye whiskey barrels for eight months. AltBitter is a two-thirds blend of the barrel-aged versions of each beer with one-third non-barrel aged beer. The result is a hoppy ale with a big, malty backbone, which pays homage to the breweries’ respective German and English influences, yet is still uniquely Oregon.

“We have been friends with Gary Fish since the early days of Deschutes Brewery,” said Rob Widmer, co-founder of Widmer Brothers Brewing. “It really means a lot to have both of our breweries come together to create a beer. We have always respected Deschutes and love what they’ve done for the Oregon craft beer community. The beer is a blend of our histories and it’s great to have finally done something together after all these years.”

AltBitter is part of a series of limited release collaboration beers commemorating Widmer Brothers’ 30-year history. The 30th Anniversary Collaboration Series is a celebration of the Oregon brewing community and the unique bond among craft brewers in Oregon. The series has previously featured collaborations with Boneyard Beer, Breakside Brewery, 10 Barrel Brewing, and Gigantic Brewing.

“Getting together with Widmer Brothers for this beer was really a lot of fun,” said Gary Fish, founder of Deschutes Brewery. “The whole process – from brainstorming beer ideas to bringing this beer to life – was a pleasure. We are happy to be a part of their 30th Anniversary celebration.”

About AltBitter
AltBitter is a unique, blended beer inspired by two classic favorites from two pioneering breweries: Deschutes Brewery’s Bachelor Bitter and Widmer Brothers Brewing’s Altbier. Imperial versions of both beers were brewed and aged separately in rye whiskey barrels for eight months. AltBitter is a two-thirds blend of the barrel-aged versions of each beer with one-third non-barrel aged beer. The result is a bold homage to the breweries’ respective German and English influences, done in a uniquely Oregon way.