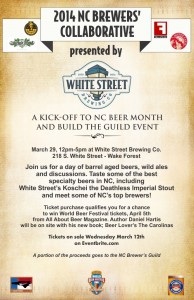 Wake Forest, NC – White Street Brewing Company is thrilled to host a kick off to NC Beer Month and Build the Guild event, with guest speakers from Fullsteam, Foothills Brewing, Mother Earth Brewing, and Wicked Weed Brewing. Featuring barrel aged and wild ales including White Street’s first cork and cage bottle, Koschei the Deathless Imperial Stout. Two discussion panels mediated by Margo Knight-Metzger will focus on “Barrel Aging Beers” and “What’s New in Brewing 2014,” followed by a meet and greet with some of the best brewers in NC. Daniel Hartis, author of “Beer Lover’s The Carolinas” will be onsite with copies of his new book, officially set to release April 15. A portion of proceeds from sales will go to the NC Brewers Guild. Tickets are $10 and include a special souvenir glass and an entry to win World Beerfest tickets April 5, 2014 from All About Beer Magazine. Tickets go on sale March 7, 2014 on Eventbrite and seating is limited.

White Street Brewing Co., a family friendly, neighborhood brewery, opened its doors in September 2012, as Wake Forest’s first brewery. Built in the 1930s as a Chevrolet car dealership, the building was renovated into a distinctive beer manufacturing facility focused on true to style ales. We’re so proud of our impressive brewhouse that it’s in full view for all to see. Our quality and commitment are equal to the big brewers, but with us you get small-town charm combined with an “everybody knows your name” atmosphere. Our historic downtown location is a gathering place for beer enthusiasts and novices alike. Come into our brewery and witness small-batch beer production at its best. Our on-site taproom, open seven days a week, has a seat waiting for you and a pint or growler ready to pour. To learn more visit us at www.whitestreetbrewing.com or on Facebook at https://www.facebook.com/WhiteStreetBrewing