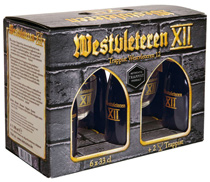 Totalwine.com announced on Tuesday that it will sell special gift packs of Westvleteran XII, complete with six bottles and two commemorative glasses for $84.99 in its store locations across Delaware, Maryland, North Carolina, South Carolina, Georgia, Florida, California, Arizona and Nevada. The beer – imported by Shelton Brothers Imports – will be available starting Dec. 12 and sold on a first come, first served basis. All proceeds will go toward helping rebuild the Abbey of Saint Sixtus, the Trappist brewery that makes Westvleteren XII and has operated since 1838 in Westvleteren, Belgium.

“For us, it’s a thrill and we are really happy to have the monks’ trust,” said Daniel Shelton, founder of Shelton Brothers Imports. “It’s not just the first time, it’s the last time that it will be distributed in the U.S.”

Steadily rated as one of the best beers in the world by review sites such as BeerAdvocate and RateBeer, Westvleteren XII has long been cherished for its complex flavor and rarity in the U.S.

And look no further than comments on BeerAdvocate to understand why the beer is so highly regarded. One commenter on the site said: “The heavens opened up, and His light came down and landed on a small Abbey of Monks. In turn, they grace the world with one of the perfectly complex beers for those lucky enough to find and partake.”

Westvleteren XII was first legally sampled in the U.S. at The Festival – hosted by Shelton Brothers – on June 23rd and 24th at Mechanics Hall in Worcester, MA.

Shelton confirmed that 14,000 gift packs will hit retailers’ shelves across 25 states on Dec. 12. Brewbound.com is still confirming which exact states will be included.