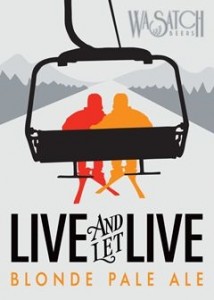 Park City, Utah — In response to the recent developments in Utah regarding same-sex marriage, Utah’s first craft brewer, Wasatch Brewery, is releasing a new beer called Live and Let Live. By pairing two types of the same ingredients, Wasatch has created a unique, but very natural beer designed to appeal to both sexes.

“Live and Let Live is a blond pale ale built with two beautiful malts and two wonderful hops, all fermented with a pair of yeasts,” says Wasatch brewer Dan Burick. “This pairing of similar ingredients is a first for Utah and we think its way overdue.” The beer is an agreeable 4% alcohol by volume and will be sold on draft in Utah and tapped to pour on Valentine’s Day.

“Our new beer has an attitude and we believe Live and Let Live will make life better for a lot of people in Utah” says Wasatch founder Greg Schirf. “Some of our political leaders would benefit from a hearty serving of Live and Let Live.”

Schirf points out that his brewery has been a practitioner of civil unions for years. “In 2000, we entered into a partnership with another brewery much like ours,” he says with a smile, referencing a partnership with Squatters Craft Beers. “Our Utah Brewers Cooperative is still happily ‘married’ today.”

According to Burick, market research has shown that Live and Let Lives’ delicious taste, easy quaff-ability and same ingredient pairings will be enthusiastically received by many of Utah’s non-discriminating beer drinkers.

“We realize this beer is not for everyone, and we will not force it on those who prefer more traditional brew styles.” he said. “These pairings are not the norm in Utah right now and we expect resistance from many. However, we are confident that in the near future Utah will look back and wonder why they didn’t embrace and celebrate Live and Let Lives’ natural combinations. They will also realize that Live and Let Live is not a threat to traditional beers.”

Schirf hopes the beer sends a message beyond Utah. He noted that he was going to send some of his Live and Let Live beer to Sochi. “I am thinking Vladimir Putin needs to lay off the vodka and drink about a case of this stuff,” he joked with his impish grin. “Live and Let Live may be hard to swallow for the majority of people in Utah right now,” Schirf concluded, “but we think it’s a step forward.”

Where to find Live and Let Live on Tap Valentine’s Day: