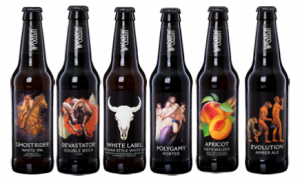 Craft breweries operating in the U.S. have grown from 100 in 1980, to more than 2,500 today. Grabbing consumer attention is not only by a breweries reputation of product quality, but more and more by shelf presence. Squatters and Wasatch utilized the talent of Sandstrom Partners for brand development strategy.

“We went back to the beginning of the story… 1986, when we created the Wasatch beer culture hidden behind the veil of Utah,” Wasatch founder Greg Schirf recalls. “Utah is an amazing place, with amazing people who make amazing beer. The opportunity to brew a little irreverence has been our style from the start; we pulled from historical label graphics and had illustrations painted by Howell Golson, creating impactful branding reflecting our edgy personality.”

“Make no mistake, evolving established brand identities is no enterprise for the weak of heart. It’s a demanding process that won’t always corral everyone’s enthusiasm” expressed Greg Schirf, “it takes a committed and progressive team.” The brewery continues to grow apace; adding members to the brewery team, a high-speed elevated de-palletizer and other cool brewer’s toys recently commissioned to support the 400-per-minute bottling line and new canning line.

“We approached evolving Squatters visual identity with the same passion and attention to detail we’ve always applied to crafting our beers — nothing but the best ingredients: a truly gifted team, and the requirement that it has to be fun,” said Peter Cole Squatters founding partner, a broad, almost naughty, smile illuminating his face. “I’m thrilled with the new Squatters packaging, I feel it truly reflects the core values we’ve had for 25 years; provide our customers finely crafted, satisfying and interesting beers, maintain a solid commitment to our community and our planet, while providing great jobs and opportunities for the people we work with — now almost 500 company-wide.” Squatters utilized photographs, and a traditional and earthy framework to reflect the real essence of each beer. 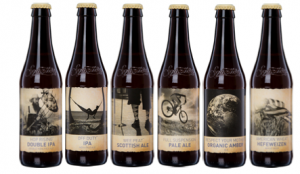 “It’s been a whirlwind these last few months, but the results of our investments have blown us away — growth is over 43% year to date and that’s before all our new packaging is fully implemented. Looks like we’re gonna have to build a bigger boat!” Greg Schirf toasts.