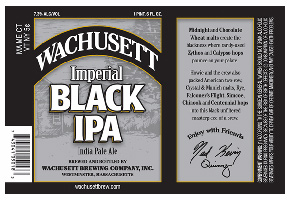 WESTMINSTER, MA – Wachusett Brewing Company will be releasing the newest edition to their current ensemble of IPA’s in January 2012.

While creating this Imperial Black India Pale Ale our master brewer Howie and his crew incorporated a variety of unique IPA style ingredients. Calypso and Zythos hops compliment the smooth malty flavors of Crystal & Munich. Dry-hopped with Falconers Flight and Centennial, the undertones of roasted and wheat add up to masterpiece of brew.

The 7.3%, 70 IBU jet black, unfiltered ale will be available in 22 oz. bottles and draft until August 2012. The edition of 12 oz. bottles will be in the Box of Brews variety pack scheduled to hit the shelves in April.

The Imperial Black IPA will be available for sampling at the brewery and for purchase through the Wachusett Brewery Store starting January 27th. The store is located on 175 State Road East in Westminster, MA. For more information on hours of operation and tours, contact 978-985-9925 or visit our website.

The First Taste Imperial Black IPA release party will be hosted at the brewery on January 26th, 2012. A limited amount of tickets are available for the event, and can be purchased in advance by contacting Kim@wachusettbrew.com or by calling 978-874-9965 ex. 28.