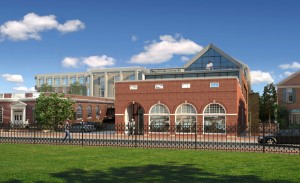 Victory Brewing today announced plans to expand its presence in the mid-atlantic region as the company looks to open a new brewpub in Leesburg, Va. It’s the company’s fourth such establishment, but the first outside of its home state of Pennsylvania.

Located inside a 110,560 sq. ft. mixed-used development belonging to the private equity real estate firm L4 Capital Partners, the brewpub, which will span three floors, is scheduled to open in the second quarter of 2016.

Blair White, co-founder and partner of L4, would not disclose specific terms of the lease agreement, but said it was “long-term.”

“Victory is assured of being there for a long, long time,” he said.

Dubbed Victory at Courthouse Square, the brewpub will occupy 13,500 sq. ft. of space, White added, and is currently being billed as the development’ “anchor tenant.”

“They’re a key anchor for us and we’re going to try to get this thing built as quickly as possible,” added White. “We took a tour of their [Downingtown] facility and saw what their general day-to-day business looks like. It kind of quickly became obvious that they were the perfect fit.”

Located near the Leesburg Town Hall and Loudoun County Courthouse, Victory at Courthouse Square will feature a 300-seat restaurant, according to a statement, and serve both the brewery’s established brands as well as site-specific recipes.

Victory currently operates a brewpub in its hometown of Downingtown and two additional locations — in Kennett Square and at the company’s second brewery in Parkesburg — are scheduled to open soon, according to its website. Victory Brewing also runs a branded beer hall at Philadelphia’s Xfinity Live! entertainment destination.

Now operational in its second brewery, which could eventually produce more than 500,000 barrels annually, Victory president and brewmaster Bill Covaleski told Brewbound in March the company is forecasting volume and sales growth of up to 15 percent this year, up from the 102,973 barrels it produced in 2013.

Covaleski could not be reached for additional comment for this story as of press time.

The full release is below:

DOWNINGTOWN, PA — Philadelphia area based Victory Brewing Company┬« (Victory) is announcing the brewery’s plans to open an additional brewpub, Victory at Courthouse Square, in Leesburg, VA. Slated to open in the second quarter of 2016, the restaurant will expand the service footprint of Victory while directly supporting the positive image of the burgeoning company and its products through direct hospitality services.

The brewpub will span three floors at Courthouse Square, an exciting L4 Capital Partners development comprised of 112,000 square feet of office and retail space and 336 garage parking spaces. Victory’s latest expansion is positioned to become an important cornerstone in one of Virginia’s best-preserved historic communities, just a stone’s throw from the Leesburg Town Hall and Loudoun County Courthouse.

Victory at Courthouse Square, the fourth Victory brewpub, will feature a 300-seat restaurant, upper-level terraces for outdoor dining, and an extensive chef-inspired menu highlighting many of the company’s signature dishes. The space will also be equipped with a full-service brew house to keep the brewery’s world-class ales and lagers—including new, site specific recipes—flowing, and allow for a more interactive customer experience by creating customized brews for special events.

“The announcement is a culmination of over a year and a half of planning and effort, and we couldn’t be more excited than we are today, to announce our expansion into Virginia,” said Matt Krueger, Vice President, Retail Operations. “We could not have found a better partner than the White family, who shared—and are now helping us realize—our vision to bring Victory to Virginia.”

“Over our 18 years of successful operations, every glass of our beer and taste of our food has been created to deliver great traditional impressions, while embracing innovation and creative opportunities” said Victory’s President and Brewmaster, Bill Covaleski. “This Courthouse Square development allows us to continue along those principles, which is why we feel so honored to be a part of the storied Leesburg community.”

Victory Brewing Company is a craft brewery headquartered in Downingtown, Pennsylvania. Founded by childhood friends, Bill Covaleski and Ron Barchet, who met on a school bus in 1973, Victory officially opened its doors in February of 1996. In addition to the original Downingtown brewery and brewpub, Victory recently opened a second state-of-the-art brewery in Parkesburg, PA to expand production capabilities and serve fans fully flavored beers in 34 states with innovative beers melding European ingredients and technology with American creativity. To learn more about Victory Brewing Company visit us on the web at www.victorybeer.com.