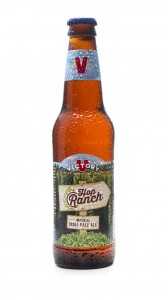 Fully juicy in its citrus character with the pleasantly sharp, biting edges of tart fruit and bitterness, Hop Ranch Imperial India Pale Ale traces its roots to Victory’s Ranch series, a unique and comprehensive study of hops in which Brewmasters experimented with different hop varieties to showcase a range of flavor profiles and celebrate the nuances and distinctions in the resulting series’ recipes.

“We knew we had something special in our Liberty Bell Ringer, but we were restless to experiment further. We chose to work with the recipe a bit, adjusting subtle flavors before we arrived at what we think is the impressive, in-your-face character embodied in Hop Ranch Imperial India Pale Ale,” said President and Brewmaster, Bill Covaleski. “We appreciate the hop ranchers who make it possible for us do what we love to do, and in turn, hope our fans appreciate this new seasonal brew.”

Victory Brewing Company is a privately held craft brewery headquartered in Downingtown, Pennsylvania. Founded by Bill Covaleski and Ron Barchet, childhood friends who met on a school bus in 1973, the brewery formally began operations in February of 1996. Victory, Pennsylvania’s widely acclaimed brewery and restaurant, now serves fans of fully flavored beers in 30 states with innovative beers melding European ingredients and technology with American creativity. To learn more about Victory Brewing Company visit us on the web at www.victorybeer.com.