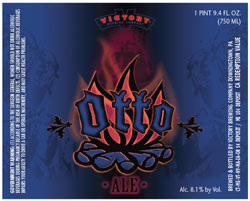 DOWNINGTOWN, PA — Victory Brewing Company pushes the boundaries of style with a new Belgian-style Dubbel ale, made with smoked malts that are typically found in Rachbier’s.

An extension of their “V” series line of beers, Otto, is a brand new beer for the Pensylvania brewing company. It will be available in limited quantities across all 29 states Victory products are sold. Suggested retail price will be $8.00 per 750ml cork-top bottle.

On October 15, beer enthusiasts will have a new reason to celebrate. Otto, a new Belgian-style, bottle conditioned dubbel ale from Victory Brewing Company, will be available in 750 ml corked bottles.

Bill Covaleski and Ron Barchet, Victory co-founders, developed the recipe for the new smoked malt dubbel based on their experience with the style during a trip they took to Bamberg, Germany in 1987. In order to create a deliciously palatable smoked beer, Bill and Ron decided to combine the sometimes-overpowering qualities of the smoky rauch style with Belgian caramel malt, which yields a perfectly harmonized final flavor.

“The complimentary flavors of smoked malt and Belgian yeast seemed like an obvious combination,” said Bill. “As far as we know, no one has bothered to put them together until now.”

Otto is made up of smoked, Munich and Belgian caramel malt, German hops and Trappist yeast. Alcohol by volume is 8.1%.