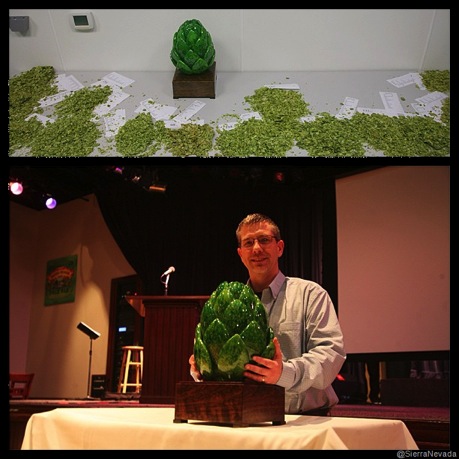 FT. COLLINS, Colo. — The Hop Quality Group, a non-profit organization pursuing the mission of promoting open communication between Craft Brewers and hop growers, today announced Van Horn Farms as the winner of the Cascade Cup. The Cascade Cup is awarded each year to the hop grower whose sample of Cascade hops demonstrates excellence in quality to a panel of judges representing the 14 craft brewers involved in the Hop Quality Group.

Judging of 14 cuts of dried whole flower Cascade samples was carried out in the research and development department of Sierra Nevada Brewery, who were playing host to the 57th Annual American Hop Convention and Hop Research Council Winter Meeting. The judges, who between them represented nearly two centuries of hop evaluation experience, probed, pressed, rubbed and sniffed the hops for an hour before declaring a winner. Van Horn Farms emerged victorious, with Golden Gate Farms (S.S. Steiner) as 1st Runner-up and Sodbuster Farms as 2nd Runner-up.

The first US-bred hop to be released by the United States Department of Agriculture’s hop breeding program, Cascade was made commercially available in 1971. Within 15 years it became popular within the nascent American craft brewing industry, eventually coming to nearly define the flavor American “microbrewed” beer in the 1990s. The Cascade hop remains a backbone of American craft beer hop character. The aromatics of the Cascade hop can be described as bright, floral and citrusy, with notes of grapefruit and pine needles.

“Van Horn’s Cascades didn’t necessarily have the biggest, boldest aromatics on the table, but instead showed great intensity, finesse and a wonderful balance of the best elements we look for in Cascades. They were really beautiful,” said judge Val Peacock, a renowned hop researcher working with the Hop Quality Group.

Van Horn Farms was started in 1904 by a French Canadian family in Moxee, WA, and remains a family affair that still works some of its original acreage (and much more), growing Palisade┬«, Chinook, Cascade and Columbus hops.

The Cascade Cup trophy, a giant 14-inch hop cone hand-fashioned in glowing green glass and acrylic, was a delightful surprise to the assembled hop merchants and brewers in the Big Room at Sierra Nevada. “It looks like the top of a building”, said one.