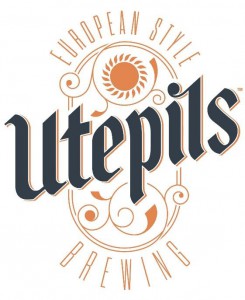 MINNEAPOLIS, MN – Utepils Brewing today put an end to the suspense surrounding the identity of its head brewer and announced that Eric Harper will be assuming the role. Harper comes to Utepils Brewing from Summit Brewing Company and is well-known in craft beer circles, winning acclaim and World Beer Cup Gold and Silver medals as part of the Summit Brewing team. Prior to that, the University of Wisconsin graduate was the Brewhouse Team Leader at Wisconsin’s New Glarus Brewing Company, home of Spotted Cow.

Dan Justesen, founder and President of Utepils Brewing, said keeping Harper’s identity under wraps was both fun and challenging during the equity raise. Justesen said, “I promised investors that our head brewer, whom we were referring to as code name “Ewald”, had the perfect skill set and resume’ to brew the award-winning European-style craft beers that we aspire to create. For Eric, that style of brewing helped convince him to come over to us.”

Harper agreed. “The plan to brew styles I personally enjoy and the European feel to the brewery were big factors for me. When I imagine creating a brewery from the ground up for myself, Utepils Brewing is that place.”

Still, leaving an established and successful brewery like Summit wasn’t an easy decision, said Harper. “I love where I work and the people at Summit are awesome. Utepils was offering an opportunity to have a lot of creative control. One of the things that helped in my decision was Dan’s recognition of the importance of quality. He understood the need to include a sophisticated brewery lab in his plan, in addition to quality equipment and ingredients, in order to make great beers. I think the Utepils team that he’s built is the ultimate reflection of that. The strength of the team is really what gives me confidence in our future success.”

Harper completed his bachelor’s degree in German Culture at the University of Wisconsin – Madison. He is also a graduate of the Master Brewers Program at University of California – Davis and has a Diploma in Brewing from London’s Institute of Brewing and Distilling.

For the past five years he has served on the board of the Master Brewers Association of the Americas St. Paul – Minneapolis District, holding roles of secretary, treasurer, and currently Vice President.

Below is a comprehensive list of awards Harper won as part of brewing teams at Summit and New Glarus:

Last week, Utepils Brewing officially changed its name from Bryn Mawr Brewing. Utepils was the name of the holding company. The word “utepils” is Norwegian for the first beer enjoyed outdoors in the sunshine after a long, dark winter. The word “ute” means outside and “pils” means beer. The “utepils moment” is widely-anticipated and celebrated every Spring by Norwegian beer drinkers.

Utepils Brewing is steeped in the traditions of European brew masters, but will soon be available close to home in Minneapolis, with plans to distribute regionally and nationally. Construction is now underway for the full-production brewery and taproom being built at the site of the former Glenwood Bottling plant. Utepils Brewing is set to open in early 2016 and will specialize in classic European beer styles and also offer select, special edition seasonal brews.