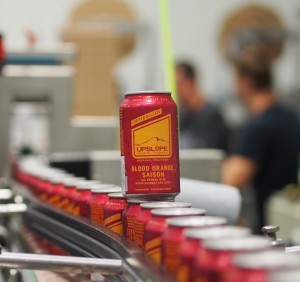 Back for its second-straight year, Upslope’s Blood Orange Saison will be available in 12-ounce 6-packs, beginning next week. The distinctive citrus flavor of the Mandarina Bavaria hops used to brew this 6% ABV saison complements the blood oranges to create a bright, juicy flavor, while the spice from the pink peppercorns interplays with the beer’s natural sweetness and dry finish.

“The original concept for this beer was born out of a collaboration with our friends Drew and Leah Watson, owners of Hops & Pie in Denver,” said Upslope’s Head Brewer Sam Scruby. “Back by popular demand for another year, we’re excited to, again, showcase this beer’s unique hop variety and interesting yeast strain.”

Upslope’s Blood Orange Saison will be available in the following markets where Upslope is distributed : Colorado, Texas, Wyoming, Arizona, Montana and New Mexico.

Also note, local Colorado Upslope drinkers are encouraged to attend the brewery’s “Tuesday Tapping” on August 30th at both of its Boulder locations—Lee Hill and Flatiron Park. The Limited Release Blood Orange Saison will be available on tap, as well as available for purchase in 12-ounce 6-packs.

Boulder-based Upslope Brewing Company is the creator of premium ales and lagers that are artfully crafted using natural ingredients. Packaged in aluminum cans for exceptional portability and because it’s best for the environment, Upslope complements the outdoor lifestyle and caters to the on-the-go beer enthusiast. The five flagship beers include: Pale Ale, India Pale Ale, Brown Ale, Craft Lager and Imperial India Pale Ale. Additional installments are offered in a Limited Release Series, the Lee Hill Series and the Tap Room Series. In an ongoing effort to protect watersheds nationwide, and the key ingredient in Upslope ales and lagers, one percent of Upslope Craft Lager can sales benefits local Trout Unlimited chapters in the state in which the beer is purchased. Learn more about Upslope at http://upslopebrewing.com/