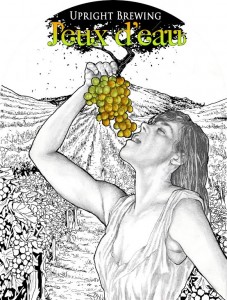 Saturday March 8th will be the release date for a new beer, Jeux d’eau! We’ve been working on it since the fall of 2012 when we brought in nearly half a ton of beautiful muscat grapes which were fermented with the beer in barrels, similar to the Fantasia. The release will be limited to three bottles per person and held during tasting room hours, 1 – 6 pm.

Description:
Jeux d’eau follows the Fantasia in our effort to produce soured fruit beers borrowing from traditional Belgian lambics while maintaining a moderate profile that doesn’t overstep, allowing the fruit to be showcased. In this case, we’re talking about half a ton of muscat grapes sourced from Eola-Amity Hills. These were de-stemmed by hand and packed into several oak barrels, where we then added fresh wort direct from the brewhouse, along with our favorite mix of yeast and bacteria. After a lengthy cask fermentation and maturation, the beer was blended and bottle conditioned for several months to develop. The earthy nose is followed by a spectrum of flavors, most notably the distinct muscat character which seems just as suited to beer as it does wine.