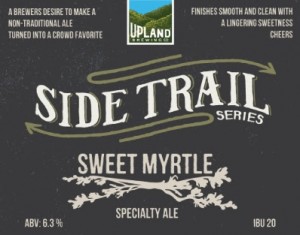 Bloomington, IN — Upland Brewing Co. announced today that Sweet Myrtle Specialty Ale will be released on draught on November 1st in select establishments. Look for it on draught at Upland retail locations on November 8th.ÔÇ¿ÔÇ¿ÔÇ¿ÔÇ¿Beer Description : Sweet Myrtle has a sweet earthy aroma. The Sterling hop addition imparts a spicy, herbal scent and plays nicely with the sweet dark fruit character from the dates added to the boil. These aspects continue on in the flavor profile; sweetness from the honey and dates mixes on the palate with the earthy herbal character of the sweet gale. This beer is not about hops, rather it highlights some atypical flavors not often found in an American craft beer. Finishes smooth and clean with a lingering sweetness.