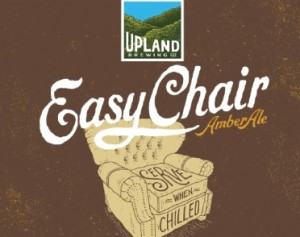 Bloomington, IN — Upland Brewing Co. announced today that Easy Chair Amber Ale will be released on draught and in six packs on October 15th.

Beer Description: Our amber ale has a malt to hop balance that is nearly even, slightly leaning toward malt. Nutty, light caramel, toasty, and biscuity describes the malt flavors of this easily approachable beer. Low yet perceptible English hop character round out the flavor which ends with a Medium dry finish.