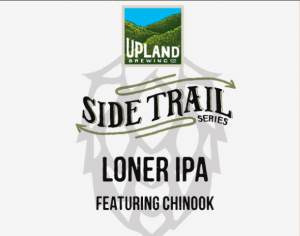 Upland Brewing Co. is excited to announce it’s newest Side Trail series beer: Loner IPA . This brew is a special release IPA featuring a single fresh hop – Chinook. The key to this beer is simplicity; Loner IPA lets the drinker appreciate each ingredient for what it is. We are excited about single hop beers so be on the lookout for more Loners as a part of ourSide Trail series. Loner IPA featuring Chinook will be available for wholesale on August 1 and on tap at Upland retail locations August 8.

Beer Description: Single Hop IPA using Chinook Hops. This classic American hop that is highly valued for its bittering capabilities as well as its piney, resinous flavor and aroma. It’s one of our favorites, so we decided to let it fully express its assertive flavor and aroma with crystal clarity. However, the beer itself will be one of the few beers that we brew which will not be clear. We’ve decided to leave it unfiltered to preserve as much flavor and aroma as possible.

About the Brewery: Located in Bloomington, Indiana, Upland’s rich history dates all the way back to 1998. Taking traditional recipes and making them a bit more awesome, Upland Brewing Co. came up with their own recipes rooted with inspiration from good beer and good friends, providing a fresh local option to their communities. The name Upland comes from the term geologists gave to this area of Southern Indiana land which was never overrun by the glaciers that flattened much of Indiana’s landscape. The adversity of the land bred independent thinkers who had strong wills, a connection to the land, and a wry sense of humor about life. Upland’s approach to brewing beer honors the spirit of these people and this place.