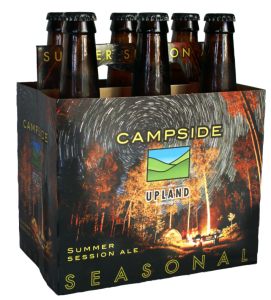 Bloomington, IN — Upland Brewing Company announced today Campside Session IPA, one of the brewery’s core seasonals, will be ready for draft release the first week of March. This crisp, refreshingly bitter beer will be on tap at all Upland locations on Friday March 14th, and at select bars, restaurants and bottle shops across Indiana, Ohio, Wisconsin, and Chicago until September.

Campside, with its low ABV and light malt foundation, is the perfect companion for outdoor adventures, whether that’s a day in the woods or a day on the lake, or even if the adventure never leaves your backyard. Rather than winding the party down, Campside will keep the stories and sing-alongs flowing well into the evening. After months of negative temperatures and record snowfall, we’re just weeks away from tasting spring!

Beer Description: It’s Campside season, available now through September! Campside is a crisp golden ale built on the foundation of delicate light malts. This allows us to showcase some of the most interesting and effervescent American hops in a way we have never before done. We saved over 75% of the hops used in this recipe to add after the batch was boiled, allowing the distinct fragrance of grapefruit, apricot and pine to be preserved as much as possible in the finished beer. With a crisp, but subtle bitterness, a refreshingly light malt character, and a 4.5 ABV, this is the perfect warm weather beverage for those who think flavor is just as important as refreshment.

About the Brewery: Located in Bloomington, Indiana, Upland’s rich history dates all the way back to 1998. Taking traditional recipes and making them a bit more awesome, Upland Brewing Co. came up with their own recipes rooted with inspiration from good beer and good friends, providing a fresh local option to their communities. The name Upland comes from the term geologists gave to this area of Southern Indiana land which was never overrun by the glaciers that flattened much of Indiana’s landscape. The adversity of the land bred independent thinkers who had strong wills, a connection to the land, and a wry sense of humor about life. Upland’s approach to brewing beer honors the spirit of these people and this place.