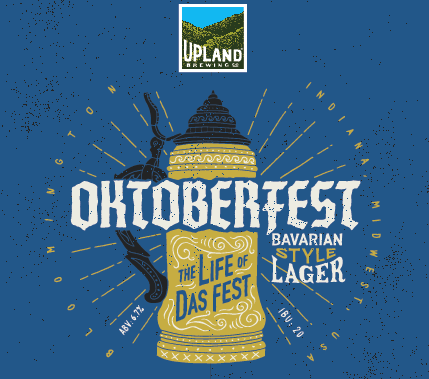 Upland Brewing Co. announced today that Oktoberfest will be available in all markets starting August 1 and on tap at Upland retail locations September 19. No season is as synonymous with beer as autumn, when the most storied beer festival of them all, Oktoberfest, takes place in Munich, Germany. Since 1810, this celebration of good food, good company, and, most importantly, good beer, has most prominently featured Marzen-style lager-so much so that many refer to the beer simply as Oktoberfest. Oktoberfest was awarded Silver at the World Beer Cup in 2010.

Beer Description: Our Oktoberfest is a traditional Bavarian lager featuring all-German malts and rare German hops. This dedication to authenticity produces a beer that would be as at home in Munich as it is here in the Midwest United States. The aroma is authentic, the taste sweet and malty, and the finish crisp and hoppy; perfect for a beautiful fall day!