Salt Lake City, UT — The receiving dock at Uinta Brewing Companywas a sea of green today with the arrival of Sum’r Organic Summer AleCompass Cans. Sum’r is a seasonal offering in Uinta’s Organic Line of beers, a citrusy and refreshing golden ale highlighted by the use of unique hops.

Sum’r will be the fifth brand of beer to be canned at Uinta Brewing Co. With the installation of a their new German canning line in early March, Uinta releasedCutthroat Pale Ale, Wyld Extra Pale Ale, Baba Black Lager and Hop Notch IPA in 12oz. Compass Cans. 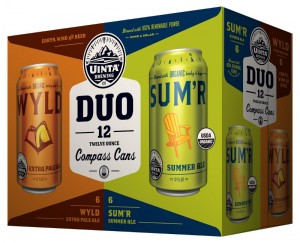 Uinta Brewing Company embarked upon its mission of brewing world class, full-flavored, craft-brewed beer in 1993. Uinta Brewing is named after an east-west mountain range located in northeastern Utah. Many of Uinta’s beer names are inspired by Utah’s diverse landscapes or have historical significance. Uinta has broadened its market and can be found in 25 states from coast-to-coast, and has even ventured to other countries around the world. Uinta is committed to brewing world-class beer using the best practices and ingredients.