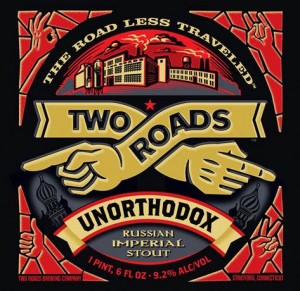 Two Roads own brewing czar, Phil Markowski, has taken a traditional Russian Imperial Stout and added a touch of “Amerika” to create a version that’s sure to please.ÔÇ¿ÔÇ¿

This most unorthodox Russian Imperial Stout is brewed with malted rye and aggressively hopped with four different Pacific Northwest varieties to create a depth of character that’s unmistakable. ÔÇ¿ÔÇ¿Full bodied with notes of rye, treacle, chocolate and espresso that join together to create a crescendo of flavor. You’ll want to do an unabashed Kalinka after just one tasteÔÇ¿.