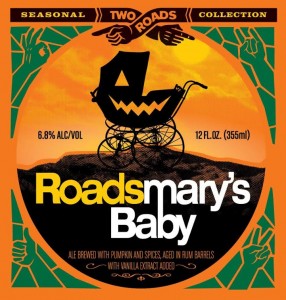 In true Two Roads fashion, Roadsmary’s Baby is not your typical pumpkin ale. Aged in Caribbean rum barrels and made with real pumpkin, vanilla beans and spices, this year’s Roadsmary’s Baby is a sequel unlike any other! At 6.8% ABV, it has a complexity and a depth of character that has become a cult classic amongst its fans.

Roadsmary’s Baby six packs will start to hit bars and store shelves on August 11th in Connecticut, Rhode Island, Massachusetts and the New York Metro area. But if you just can’t wait until then for this wicked good beer, it will be previewed on draft at the brewery starting at noon on August 6th.