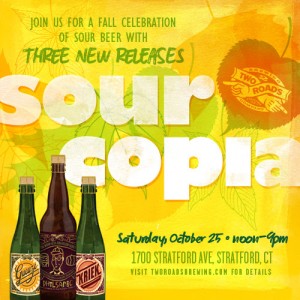 Stratford, CT — On Saturday, October 25th, Two Roads will be release three new sours at their brewery in an event they are calling, “Sourcopia.”

Two lambic style beers and a special beer commemorating Brewmaster Phil Markowski’s 25 years of craft brewing will be on sale. Patrons will be allowed to purchase a maximum of two of each style for a total of six bottles on a first-come, first-serve basis.

Two Roads Kriek is re-fermented with sour cherries sourced locally from Staehly Farms in picturesque East Haddam, CT. There, Two Roads brewers hand-picked sour cherries from trees imported from France in the 1950’s. After brewing, the lambic is mixed with the cherries into oak barrels and aged for over one year until the right balance of sourness and cherry-like tartness is achieved. The bottles are 375 ml with a cork and cage finish. 700 bottles will be on sale for $10 each.

Two Roads Gueuze has been a work-in-progress at Two Roads for 15 months, maturing in oak barrels and undergoing a series of secondary fermentations to develop its characteristic sour, farmhouse funkiness. Honey from Two Roads’ estate beehives was added to the bottles to aid in bottle conditioning. Gueuze is packaged in 375 ml cork and cage bottles. 700 bottles will be on sale for $10 each.

Last is Two Roads most unique beer to date — a beer made with 14-year-old Italian balsamic vinegar from Modena and aged in red wine barrels for 20 months. Two Roads is calling it “Philsamic” to celebrate Brewmaster Phil Markowski’s 25th year of craft brewing. Philsamic is packaged in 750 ml cork and cage bottles. 500 bottles will be on sale for $25 each.

During Two Roads’ “Sourcopia” celebration on October 25th, all three of these beers will be on draft at the brewery’s Tasting Room (limited supply available) and Two Roads will host a number of local food trucks offering the perfect culinary complement to these sour beers.