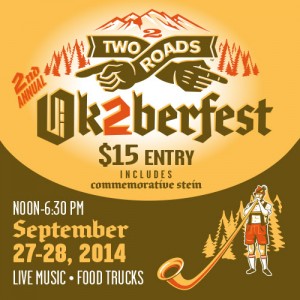 Stratford, CT — It may be known as Oktoberfest but the real fun begins later this September. ÔÇ¿ÔÇ¿

Stratford, CT’s Two Roads Brewing Company will be celebrating their 2nd annual “Ok2berfest” on the grounds of their 100+ year old brewery and it promises to be two days of beer, food, music andÔÇª more beer!

Building on the success of last year’s event, this year’s Ok2berfest will be a must-attend festival for beer lovers. And speaking of beer, Two Roads has brewed up two different Oktoberfest style beers just for the occasion dubbed “Ein” and “Zwei,” that honor the Bavarian Oktoberfest tradition that originated in 1810.

And since nothing goes better with flavorful craft beers than good food, great local eats will be served by some of the area’s top food trucks. If you’ve ever been to Two Roads, you’ll be familiar with some of the amazing culinary creations area chefs have been serving up in these fun gastro-mobiles!

Both days will also feature live music all-day long, games and a giant beer garden tent where Ok2berfest goers can relax and take it all in.

The $15 entry fee gets you a beautiful, sturdy German-made traditional glass stein and access to all the beer, food and fun.

Tickets are on sale through Two Roads website: www.tworoadsbrewing.com where you will also find more information about the day including band schedule, the food truck line up and other pertinent information.