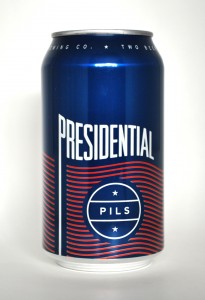 SEATTLE — This summer, fire up the grill and break out the latest release from Two Beers Brewing! Hitting shelves this week throughout the Seattle area, Two Beers Brewing’s Presidential Pils — a slightly hoppy Czech-style Pilsner — is the perfect pick for your warm weather festivities. Easy to spot with its bright blue exterior and American flag design, these limited edition cans will add a spark to any hike, camping trip, day on the boat or Independence Day celebration.

“Warmer weather and outdoor activities call for a refreshing, easy drinking beer,” said Joel VandenBrink, founder and head brewer of Two Beers Brewing Co. “The problem is, there aren’t many local Pilsners available in cans. That’s where the Presidential Pils comes in. Whether you’re on the lake, watching the fireworks or barbecuing in the backyard, it’s the perfect pairing.”

An uncommon style to be brewed in the Pacific Northwest, the Presidential Pils is a Czech-style Pilsner featuring a 4.8 percent ABV. Brewed using 100 percent Pilsner malt and Czech Pils yeast strain, this sessionable Pilsner offers notes of spice and grass, thanks to the Saaz and Perle hops used to create it.

Available only in 12-ounce cans, Presidential Pils will be available at The Woods tasting room, as well as a variety of local specialty and grocery stores throughout the Seattle-Bellevue area, including Whole Foods Westlake, QFC and specialty bottle shops throughout the greater Seattle area. Pick up a six-pack of this limited edition brew for your cooler now through early August.

Two Beers Brewing Co. — makers of Evolutionary IPA and a host of Northwest-inspired beers — began operations in a small Seattle basement in 2007. Today, Two Beers Brewing produces twelve unique beers including five year-round, seven seasonals and a host of intricate infusions in its 4,800-square-foot SoDo brewery. Two Beers Brewing can be found in Seattle-area bars and restaurants, with tastings kegs and growler fill-ups available at their tasting room located at 4700 Ohio Ave. S. in SoDo, open weekly Tuesday — Friday from 3 p.m. to 8 p.m. and Saturdays from 1 — 6 p.m. Select brews can also be found in 22-ounce bottles and 12-ounce cans through the tasting room, as well as local retailers in Washington, Oregon, Alaska, Vancouver and Northern Idaho. For more information, visit www.twobeersbrewery.com.