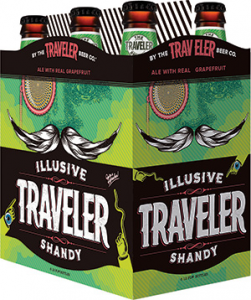 BURLINGTON, VT —The Traveler Beer Company, makers of THE American Craft Shandy, is pleased to announce a brand new year-round Shandy — Illusive Traveler. Thirsty drinkers looking for something new and refreshing will be able to order a Curious Traveler, and now an Illusive Traveler, and enjoy a new-world take on an old-world pub favorite.

The Traveler Beer Company — innovators behind Curious Traveler and the newly released Shandy, Illusive Traveler — has taken a traditional European drink and given it a new twist with an authentic American version. The original British pub Shandy is a mix of lager and lemon soda. However, Traveler has introduced a version inspired by the recent American passion for high quality, craft beers. Traveler’s Shandys are craft beers actually brewed with refreshing ingredients such as fresh lemon/lime, strawberry and now real grapefruit. Flavorful, refreshing and sessionable, these are Shandys for beer lovers.

Illusive Traveler, a member of Traveler’s year-round selections, is a wheat ale brewed with real grapefruit, giving it a satisfying citrus aroma for a refreshing, flavorful drinking experience. Illusive Traveler is available in bottle only.

When asked why the new Illusive Traveler Shandy is brewed with real grapefruit, Alan Newman, founder of The Traveler Beer Company said, “Simply stated, fresh grapefruit is delicious in beer and refreshing. Why not? The Shandy trend is making its way into the American craft beer scene, and we’re excited to help lead the charge with Traveler.”

Curious Traveler, the original, is an American craft wheat ale brewed with fresh lemon and lime giving it a distinctively fresh flavor. It is available in bottles and cans, as well as on tap in bars and restaurants.

Also for Shandy fans, Time Traveler is a delicious wheat beer brewed with fresh strawberry. This refreshing seasonal offering is available on draft and in bottles through July.

Based in Burlington, Vermont, The Traveler Beer Company has now released two year-round Shandys, and a variety of seasonals (with more styles to come) — all inspired by European tradition, but brewed with an American spirit for innovation. Alan Newman, a veteran of the U.S. craft beer movement, created this series of refreshing, playful, and decidedly American Shandys in an effort to continue expanding the American appreciation for craft beer.