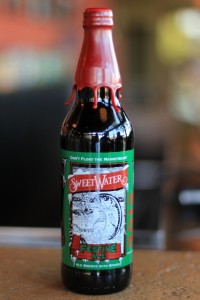 ATLANTA, GA — Buckle up and hold on tight ‘cause SweetWater Brewery is whippin’ it real good this winter with a sleigh load of tasty treats for all the naughty (and nice) folks across the Southeast. The Atlanta-based brewery released fan favorite Festive Ale again this October and unveiled their latest addition to the Catch & Release lineup — Whiplash — the second week of November.

Festive Ale (October — December): SweetWater is bringing back the festivus for the rest of us. Once again, the brewery elves have been hard at work, packaging up Festive Ale which began decorating shelves in late October. The perfect brew to put fans in the mood for roasting chestnuts and jingling their bells, Festive Ale is brewed with a sleigh-load of Centennial and Golding hops and capped with a dash of cinnamon and mace. Measuring 8.6% ABV, this high-gravity brew is sure to keep drinkers warm and toasted all winter long.

Whiplash (November — February): What happens when a 500-year-old Belgian style ale gets rear-ended by a truckload of American hops? It gives ya one heck of an ambulance-chasing brew. Whiplash is SweetWater’s dry hopped version of a pale Belgian ale. This white IPA gives off subtle notes from the Belgian yeast complimented by a citrus and piney hop finish.

Package Details: Festive Ale will be wrapped up in six-packs, 22-ounce hand-waxed bombers, and pouring on draft through December. Whiplash will park itself on to draft taps and shelves in six-packs and in Tackle Box variety packs throughout the region until late February. Make sure to mark ‘em down on your gift list though, ‘cause just like the holidays, these seasonal sippers only come around once a year.

For more information on SweetWater Brewing Company and their seasonal lineup, visit www.sweetwaterbrew.com.