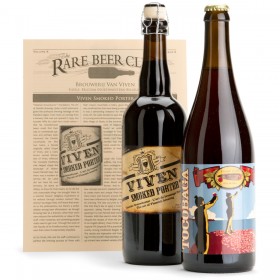 Lake Forest, CA — The Rare Beer ClubÔäó’s PSP (Personalized Shipment ProgramÔäó) allows members to easily add more bottles of either or both of the upcoming featured beers, add more of favorite past selections, replace one or both of the featured beers with favorite past selections, choose not to receive one of the featured beers, or even skip the entire shipment altogether. In short, members are in complete control of what they receive each month and will never get a beer they didn’t want to get. No other beer club offers that kind of flexibility.

Each month prior to receiving their shipment, members are sent an email detailing the two upcoming beer selections and given the ability to customize what they want to receive. Members are automatically enrolled in the program and gift recipients may easily enroll upon request.

Four different membership types are available from The Microbrewed Beer of the Month Club, but when only the best will do, The Rare Beer ClubÔäó features the finest the world of beer has to offer in limited-release, artisanal beers such as Jolly Pumpkin’s Biere de Goord, an oak-aged spiced saison brewed exclusively for club members. Or Elevation Brewing Company’s Prostator, an 8.5% Bamberg-style smoked dopplebock which was also only available to members. Owner Kris Calef states, “We work with the world’s hottest microbreweries such as Fant├┤me, Lost Abbey, Jester King, Cigar City, Mikkeller, The Bruery, and Anchorage Brewing Company to bring you their latest creations, often months before they’re available only in local markets.”

Memberships range from 2-12 months and can be sent monthly, every other month, quarterly or even on specific months. Gift givers can even combine a Rare Beer ClubÔäó membership with the company’s three other beer club options into one custom membership using its Design Your Own Club ProgramÔäó. Any of the four beer clubs may also be combined with the company’s other exclusive clubs including Wine, Cheese, Cigar, Chocolate, and Flower of the Month Clubs.
For more information, please visit www.beermonthclub.com

The Microbrewed Beer of the Month ClubÔäó offers four different options for consumers. From the very inception of our original domestic beer of the month club in 1994, we’ve focused on consistently providing three primary product characteristics: Quality, Variety & Freshness. And in that spirit, we now offer you four outstanding beer club options, each dedicated to those same principles. Our owner’s favorite club, The Rare Beer ClubÔäó, features the finest the world of beer has to offer in limited-release, celebratory, artisanal beers from some of Michael Jackson’s favorite breweries. Two different selections are presented each month in 750 ml bottles, often cork finished, and some individually tissue wrapped. Members experience bold U.S. and imported interpretations of Farmhouse Ales, Russian Imperial Stouts, Barley Wines, Belgian Abbey Ales, varied Imperial, Extreme, Strong Ale and Grand Cru offerings, oak-aged ales imparting bourbon and vanilla notes, and much more. Many selections are pushing the envelope of creativity, are not yet distributed in the U.S., and brewed such that they can be cellared and aged.