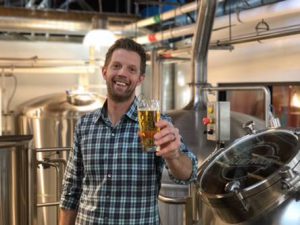 The Cicerone Certification Program today announced that Tenth and Blake Beer Company’s Daniel Imdieke has become one of just 13 individuals to earn the title of Master Cicerone. Imdieke earned the certification through a series of exams culminating with two days of intense written and oral questioning about beer styles, draft systems, beer evaluation, brewing technology and beer and food pairing given on October 25-26 in Chicago.

“Imdieke posted impressive results throughout all areas of the exam,” said Ray Daniels, founder and director of the Cicerone Certification Program. “We are thrilled to have him as a representative of the Master Cicerone title.”

“We’re very fortunate to now have two Master Cicerones on staff,” said Scott Whitley, President and CEO of Tenth and Blake. “Daniel has worked incredibly hard to attain this title and we’re extremely proud of his achievement.”

Founded in 2007, the Cicerone Certification Program tests and certifies beer expertise similar to the wine world’s Master Sommelier program. The Master Cicerone exam includes six hours of written essay questions, two hours of oral examination from 12 different industry experts and two hours of tasting and evaluation covering more than 40 different samples of beer. Candidates need an overall score of 85 percent to pass. A total of 15 candidates took the October 2016 exam in Chicago, with two individual achieving a passing score. Across all Master Cicerone exams, there have been 152 exam attempts with 13 individuals achieving a passing score.

About Daniel Imdieke
As a Trade Brewer for Tenth and Blake, Imdieke is responsible for beer education for sales and marketing team members as well as retailers and consumers. Imdieke began his own beer journey in the early life of the Yard House restaurant, directing the development of staff beer and bar training programs, and new restaurant openings at the national level for nine years. Prior to joining Tenth and Blake, Imdieke was manager of beer operations for Old Chicago Restaurant and Taproom, where he oversaw beer purchasing and promotions and instituted a new beer training program. Imdieke has a Bachelor of Arts in literature and legal studies from Claremont McKenna College and has furthered his beer education at the Siebel Institute in Chicago.

About the Cicerone Certification Program
Founded in 2007 by brewer, author and beer educator Ray Daniels, The Cicerone Certification Program seeks to ensure that consumers receive the best quality beer at every service occasion. To facilitate this, those who sell and serve beer are encouraged to acquire knowledge in five areas: 1) Beer Storage, Sales and Service; 2) Beer Styles and Culture; 3) Beer Tasting and Flavors; 4) Brewing Ingredients and Processes; 5) Pairing Beer with Food. For more information on “What is a Cicerone?” visit: cicerone.org/about