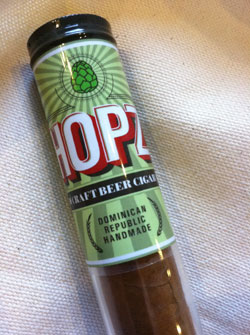 LOUISVILLE, KY – Ted’s Cigars introduces the HOPZ seasoned Cigar. After working for more than six months with a wide variety of different types of hops and tobacco blends, Ted’s Cigars has created the first ever craft beer cigar aromatically seasoned with Centennial hops.

“We have captured the unique flavor of Centennial hops and combined it with a premium hand rolled Dominican Republic cigar to give the craft beer consumer the perfect cigar to smoke with their favorite brew,” said Ted Jackson, Founder of Ted’s cigars. “The result is a cigar that is a worthy complement to the great craft beers available today.”

“Ted’s has created an outstanding companion to my favorite IPA craft beer with their new and innovative HOPZ Cigar,” said Michal Leedle, Director of Cigar Sales for Lipman Brothers, Tennessee’s premier craft beer distributor. “I’ve been in this business for many years and have never experienced a product like this – truly remarkable.”

Through the use of Ted’s Cigars proprietary seasoning process, the company has successfully and subtly imparted the aroma and flavor of Centennial hops into the cigar, creating a unique blend to be enjoyed by cigar and beer enthusiasts alike.

The HOPZ Cigar is a premium handmade 6×50 Toro with a Cameroon Wrapper, US Connecticut binder and Dominican Republic filler. Each cigar is sealed airtight in a glass tube that requires no humidor and gives the product an indefinite shelf life.