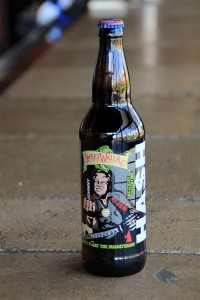 ATLANTA — SweetWater Brewing Company will have fans walking the line this spring with its newest Dank Tank series release — Johnny Hash. Brewing to the tune of one of rock n’ roll’s greatest godfathers, SweetWater whipped up a bold double IPA using Citra hop hash – a pure, concentrated form of hop resin scraped straight from the belly of Yakima Valley hop pelletizers. The brew will be burning a ring of fire throughout the Southeast beginning this April.

SweetWater’s newest outlaw clocks in at 8.5% ABV. This straw-colored brew gets its color from a blend of two types of Pilsner malts, along with 2-Row and wheat, setting the baseline of the brew with a smooth mouth feel. Brewers picked up the tempo, adding Amarillo hops to the kettle phase for an extended and bittering boil.

Taking the stage in the whirlpool and dry-hopper, Citra hop hash joined the party to develop the beer’s bold flavors and aroma. The hash resign is packed with an abnormally high concentration of oils and alpha acids — the bittering component found in hops — delivering an intense citrus aromatic taste.

“Johnny Hash is a unique IPA for hop lovers,” said SweetWater Head Brewer Nick Nock. “Using hop hash was uncharted territory for us and we didn’t know exactly what we were going to get from it. We kept the grain bill pretty basic and used a limited amount of traditional hops, then beefed up the hop hash to a pound per barrel to really pack a punch and best allow its flavor to come through.”

Johnny Hash will be busting open cell (and cooler) doors throughout the Southeast beginning as soon as April 11. Following suit with Dank Tank series brews, this one-hit wonder will be featured in 22-oz bottles and on draft taps at select bars and restaurants. Since this is a limited run, fans are encouraged to snag ‘em up and drink ‘em up before the whistle blows and the blues set in.

Living by the motto “Don’t float the mainstream,” SweetWater Brewery has been blazing its own path in craft beer throughout the Southeast since its inception in 1997. With a brewer calling the shots, quality of beer— and life—are always most important in crafting a lineup of lip-smackin’ brews. Widely known for its flagship 420 Extra Pale Ale and recent Great American Beer Fest gold medal winner LowRYEder IPA, SweetWater also serves up an ever-evolving Catch & Release seasonal lineup of brews and an off-beat, one-off Dank Tank series. SweetWater invites folks to join them for tours and tastings of their Atlanta brewery every Wednesday through Sunday. Visit www.sweetwaterbrew.com for more info about SweetWater, or hang out with your social thang out by following SweetWater on Twitter/Instagram @sweetwaterbrew, or on Facebook at facebook.com/sweetwaterbrew. And always remember; drink ‘em if you got ‘em!