ATLANTA — As 2012 came to an end, SweetWater Brewery once again began serving up its fan-favorite winter seasonal, Happy Ending, to thirsty Southeastern locals. Ironically, it’s also been one heck’ova happy ending for the folks at the brewery as they successfully culminated their 15th year of operation, and set their sights towards 2013.

SweetWater sold roughly 110,000-barrels in 2012, a 15% increase over 2011. Most of that growth came from SweetWater’s existing sales footprint, as it wasn’t until the fourth quarter of 2012 that the brewery was able to expand its distribution to various new Southeastern markets including: Tampa, Orlando, Sarasota and Ft. Myers, FL; Rock Hill, SC; and Cookeville and Clarksville, TN. With the help of its recent brewery expansion, SweetWater hopes to continue developing its distribution footprint in 2013 to bring its unpasteurized ales further into southeast Florida, westward into Tennessee, as well as entering the state of Virginia.

The brewery is adding the finishing touches on the final stage of its $19 million expansion, concluding a project nearly two years in the works. The last of the three construction overhaul projects, Phase 3, includes the brewery’s new 250-barrel brew house, an upgrade from their original 50-barrel facility. With 10 new 1,000-barrel fermentation tanks, four new 1000-barrel brite tanks and a slew of shiny new brew house equipment, brewers completed initial tests through the new system in late December, and are now dialing in the final touches before firing up the lines for the real deal.

The first beer to christen the new brew house will be a fresh label introduced from the brewery’s notorious Dank Tank series, entitled Some Strange. This black IPA is the latest of Captain Danko’s high-gravity concoctions, weighing in at 10.0% ABV. Folks can expect to see the brew hit shelves in the first quarter of 2013. SweetWater encourages drinkers to stay tuned for a future announcement outlining the story behind the beer and official launch details.

As the brewery casts its line into 2013, SweetWater promises to keep fans covered with all the need-to-know 411 on its lip-smackin’ lineup and events rolling out in the New Year. See below for the brewery’s 2013 Fishing Calendar (a seasonal outline of beer releases) and the 2013 Events Calendar.

For more on SweetWater Brewery and upcoming events, visit www.sweetwaterbrew.com.

SweetWater Brewing Company is an Atlanta?based craft brewery living by the motto “Don’t Float the Mainstream!” SweetWater’s brews are unpasteurized and designed to be consumed fresh so distribution is limited to the Southeast. The award?winning lineup of year?round brews includes SweetWater 420, IPA, Exodus Porter, Blue, LowRYEder and Georgia Brown. SweetWater also features a Catch and Release series of beers available on a limited basis throughout the year, and an experimental, one?time?only Dank Tank series. The SweetWater Brewery, open for tours every Wednesday, Thursday and Friday from 5:30?7:30 p.m. and Saturdays from 2:30?4:30 p.m., is located at 195 Ottley Dr. NE, Atlanta GA 30324. For more information about SweetWater Brewing Company, please visit www.sweetwaterbrew.com. For more of a social relationship with SweetWater Brewing Company follow @sweetwaterbrew on Twitter and become a fan on Facebook: www.facebook.com/sweetwaterbrew. 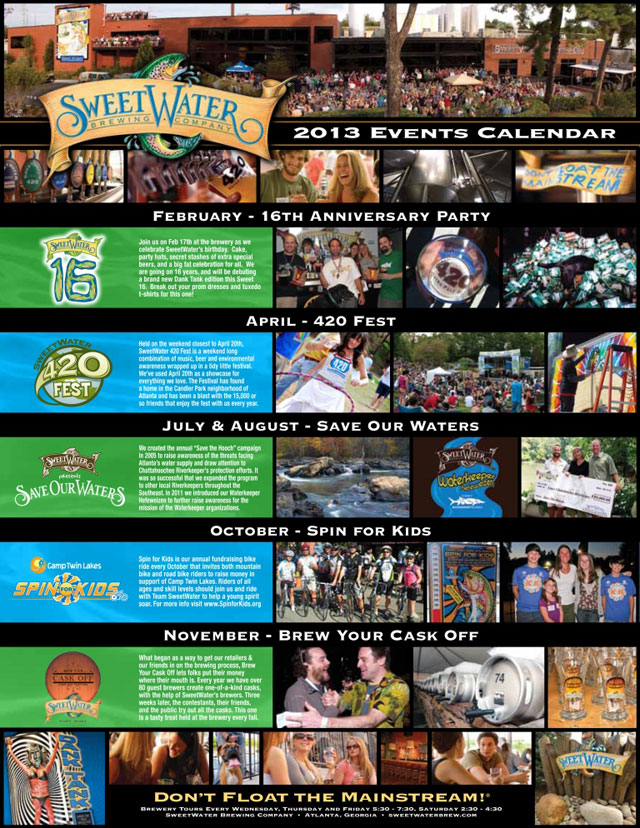 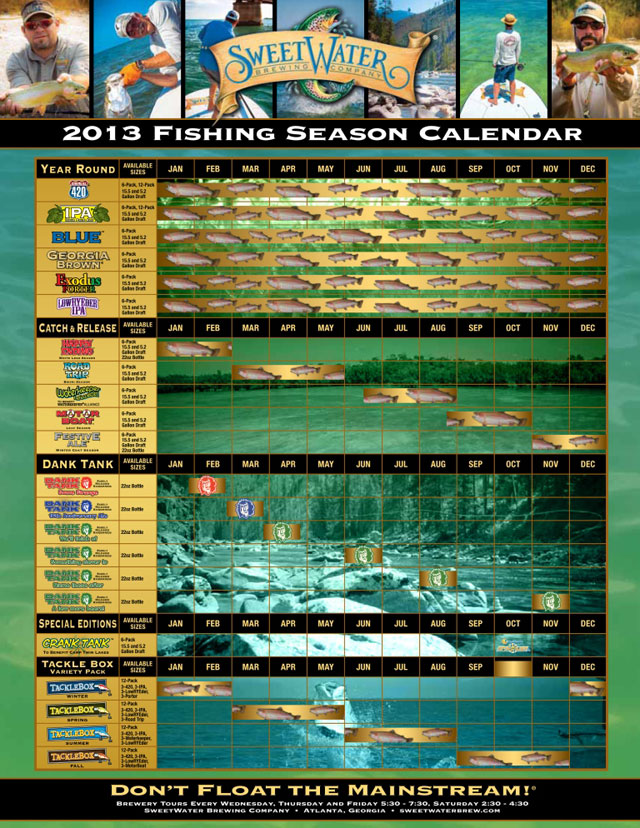