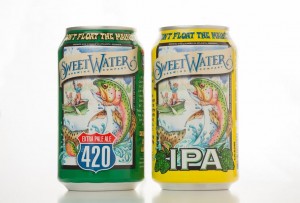 ATLANTA, GA — SweetWater Brewery has one question for craft beer lovers…CAN you dig it? On the heels of its 17th anniversary, the Georgia-based craft brewery unwrapped a shiny new gift that will keep on giving — a brand-spankin’ new can filler. The new aluminum cans will debut this March in two styles including SweetWater’s flagship 420 Extra Pale Ale, and hoppy fan-favorite SweetWater India Pale Ale (IPA). Both brews will be offered in two sizes — 12-oz and 16-oz cans.

SweetWater’s can line made the journey across the pond from leading German packaging and bottling manufacturer, Krones, and was put through its paces in early February. The new canning line features a 52-valve filler and six-head seamer with a capacity to package a head- spinning 550 cans per minute. The cans are manufactured by Ball Corporation and will feature blue tabs and Eyeris Graphic printed labels — a high-definition, photo-quality technology.

With quality of craft always top of mind as the brewery adds this new package to the portfolio, SweetWater’s canned brews will all be can- conditioned to naturally keep the beer fresher and top quality. In a nutshell, this process will add a small amount of priming sugar and live yeast to the beer prior to being canned. Brews will be kept at roughly 65-degrees for a warm conditioning of 5-7 days where the yeast will metabolize the sugar and excess oxygen in each can, creating a more stable beer and naturally extending its shelf life. The cans will then cool condition for 2-3 days to put the yeast in a dormant phase before hitting shelves.

“This project has been a long time coming and now with our expansion in place we can finally make cans happen,” said Founder and Big Kahuna Freddy Bensch. “Out of loyalty to our beer and our customers, we knew we had to take this process to the next level with can- conditioning to ensure folks will enjoy the same fresh, great-tasting beers they’re accustomed to from SweetWater. Can conditioning is just a start; we’re always evolving our commitment to quality and applying these conditioning practices to bottles is next on the horizon.”

Adding cans was a pipedream just a few years ago as the brewery struggled to keep production up with the demand for bottles and draft beer. Now that the expansion is complete, cans will allow SweetWater fans to enjoy its heady brews to places like beaches, parks, campsites, stadiums and fishing holes where glass bottles aren’t permitted. Cans are also known for being lighter to pack in and 29% more likely to be recycled according to the Aluminum Association. But that ain’t all, cans strike the fancy of brewers too. The air-tight aluminum packaging is impermeable to light and oxygen, reducing the chance of brews getting funky.

Looking industry wide, canned craft beers grew rapidly in 2013 reaching a total volume of ~160MM, accounting for 12.7% overall case growth. The can segment of craft beer sales alone grew 3.5% (in Nielsen measured channels), up from 2.2% from one year ago. This year, craft can sales are projected to double according to SymphonyIRI market research.

Cans will be cooler-ready just in time for spring. Kicking off with 420 in 12-oz cans the first week of March, SweetWater will roll out IPA 12- oz cans and both styles in 16-oz tallboys in late March. Cans will be offered statewide throughout Georgia for the first couple of months, and then hitch a ride to shelves throughout the rest of SweetWater’s Southeastern footprint.