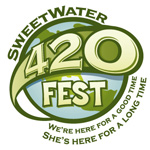 ATLANTA – Celebrate Mother Nature this spring at the 8th Annual SweetWater 420 Fest with a diverse lineup of talent and activities to fill a weekend!

Kicking off on “420” and continuing through Sunday, April 22, the weekend is jammed-packed with activities that include performances from regional and local artists, live comedy, a cask ale tasting, Planet 420, the kid’s zone, and more.

A portion of the proceeds raised will be donated to Park Pride for park improvement — as part of the mission of the 420 fest is to leave the park in better shape than it was found each year.

Building on seven fantastic years, SweetWater 420 Fest stacked a line-up of bands that include regional touring artists along with smaller hometown favorites and paired them with the Southeast’s favorite beer. “Staying true to our festival roots, the line-up this year will include some great musicians along with a wide spectrum of things for folks to see and do,” explains Jennifer Bensch, Festival Promoter & Principal at Happy Ending Productions. “We’re also excited that the first day of the festival falls on “420” this year, making the 2012 event extra festive.”

SweetWater 420 Festival line-up includes the following artists as of January 3, 2012:

As the music fills the park, attendees of all ages can also check out eco-friendly and environmentally themed on-site events and activities. In an effort to teach patrons to learn easy sustainable ways to integrate earth friendly practices back to their community and homes, Planet 420 presented by Gas South will be filled with more than fifteen local, regional and national non-profit and environmental organizations. Other eco-friendly partners include Change of Atmosphere, who specialize in organizing exhibits and forums for activism that included yoga in park, grease to diesel demonstrations, eco art, sustainable living forums, solar energy exploration, activism through music, alternate transportation in the ATL, round table discussions for Georgia’s Energy Future, youth climate activism, eco book building, water conservation measures and so much more.

For those whose jokes don’t flow as well as the beer, Improv workshops will also be offered during the day, festival fans of all ages are welcome. After you brush up on your skills tell your best jokes to the film crews surfing the crowds and hear them replayed in the Relapse 420 Comedy Tent. Adult entertainment after the sun goes down will include Dad’s Garage and Relapse Theater, along with sets from other popular Atlanta comics.

Don’t miss the traditional cask ale tasting on Sunday at 2pm. Samples from five cask ales from SweetWater Brewery will be available to taste, including recreations of the top three judges’ choices and the crowd favorite from the “Brew Your Cask Off” festival. Plus in a special appearance, head Brewer at SweetWater, Nick Nock, is making his own special cask for SweetWater connoisseurs.

Admission is free with local art, food and SweetWater’s award?winning brews available for purchase. Adults, 21 and up with a valid ID are requested to purchase a $5 wristband before consuming alcohol. A portion of the proceeds from wristband sales is donated to Park Pride for Candler Park improvements. Funds from the 2011 festival were donated for beautification projects, the maintenance of the 420 Fest walking trail and to help fix the park’s community soccer field. Be sure to rub your toes in the new grass and do your part this year to take care of it. Please pick up, recycle what you can, and deposit all waste in its proper container.

The SweetWater 420 Fest is a Happy Ending Productions Event. For more information, please visit www.sweetwater420fest.com, or follow us on twitter @420fest or become a fan on Facebook.