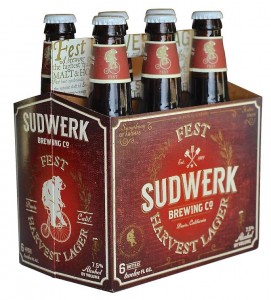 DAVIS, Calif. — For those in the know, Oktoberfest starts in September. And Sudwerk Brewing Co. is ready, with a fresh take on its Fest Harvest Lager.

Specializing in German style lagers since 1989, Sudwerk’s mission now is to redefine the American lager. Its fall seasonal beer, the Fest Harvest Lager, is a maltier, more robust and flavorful version of its M├ñrzen Amber Lager. This year’s release uses copious malts for a higher, more festive alcohol content (7.5% ABV), and mild bitterness (25 IBU). But it’s the lagering process that makes the 2014 version special. In keeping with tradition, the Fest Harvest is fermented and cold conditioned for eight weeks — twice as long as usual.

“The extra lagering adds subtle nuances and a clean, crisp finish,” said Lead Brewer Mike Hutson, who helped bottle the first run on Aug. 21. “It’s how it originated in Bavaria, where M├ñrzen (March) lagers were stored in caves through summer and had a little higher alcohol, so they’d keep.”

Sudwerk will celebrate the launch of the festival season on Friday, Aug. 29, from 4 to 8 p.m. at its taproom, adjacent to the restaurant, at 2001 Second St., in Davis. Lederhosen and dirndls are encouraged. Starting that week, six packs of the Fest Harvest will be available at Whole Foods, Nugget Markets, Davis Food Co-op, Raley’s, Safeway and other select merchants around California. Fans will also find it on tap — in limited release — at select accounts throughout the state.