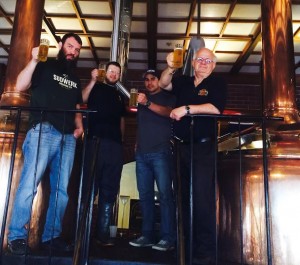 DAVIS, Calif. — The UC Davis brewing students who won the program’s Iron Brew competition got an extra bonus this year: a commercial batch of their prize-winning recipe produced at Sudwerk Brewing Co.

Each year, students in Charlie Bamforth’s Practical Malting and Brewing class compete for the Iron Brew title, where student teams present a beer they formulate, brew on campus, and analyze. A panel of experts judged the entries this spring.

Bamforth, the Anheuser-Busch Endowed Professor of Brewing Science at UC Davis, said, “I truly view this as a capstone class that many students take as their last course at Davis. It brings together all of the basic and applied science and engineering that they have learned, and shows the students just how tough it is to make great beer — but how satisfying it can be.”

On June 13, both students graduated with bachelor’s degrees in food science with an emphasis in brewing. Williams plans to continue in the fall to pursue a master’s degree, studying beer under Bamforth.

Vargas, 33, gave credit to Williams’ recipe, which they first brewed a year ago in Vargas’ Davis garage. They knew it was their Iron Brew entry when “we tapped a keg of our K├Âlsch at a backyard barbecue, and the keg went bone-dry later that night.”

Williams, a 35-year-old father of two, was surprised by the win, noting “several of our classmates made excellent beers.” The competition featured about a dozen brews, including Pale Ales, India Pale Ales, a Brown Ale, a Scotch Heather Ale, and some Hefeweizens.

Sudwerk will continue the commercial batch prize with future Iron Brew contests. Bamforth lauded the partnership: “The students were thrilled this year to have the prize being their beer brewed on a production scale. It reminds them that when they study brewing at UC Davis, they are just one step away from delighting consumers with their skills and passion.”

On May 30, the winners and Sudwerk Lead Brewer Mike Hutson produced 13 barrels of the K├Âlsch. On Thursday, July 10, it will be transferred to about 20 kegs.

The K├Âlsch will be available, while it lasts, at:

Hutson was one of the competition’s judges, along with brewer Thomas Stull from Sudwerk, Scott Ungermann from Anchor Brewing, David Mathis from American River Brewing, and winemaker Nick Gislason from Screaming Eagle.

Sudwerk has deep connections to UC Davis, and provides classroom space above the brewery for its Extension Master Brewer’s Program. The affiliation serves both sides. All of Sudwerk’s brewing employees are products of UCD’s brewing programs.

“We hugely value our links with Sudwerk,” Bamforth said. “Lots of our students are to be seen there helping out with things like packaging, cleaning, and in the lab. In return, it is great to have the Sudwerk guys significantly involved on campus, talking to classes and featured in our advisory group.

“To have the nation’s top brewing program and one of the pioneers of the craft sector located in Davis is a powerful combination, and one that we are building upon.”

Building on 25 years of family legacy and brewing tradition, Sudwerk Brewing Co. specializes in artisanal craft brews, specifically West Coast craft lagers. Its taproom, The Dock Store, at 2001 Second St., in Davis, Calif., is open from 5 to 8 p.m. Tuesdays, and 4 to 8 p.m. Thursdays through Saturdays. It offers a rotating menu of experimental and innovative beers, “honest pints” and growler fills, fresh White Labs brewers’ yeast, and good conversation. For more details on the brewery and its events, visit http://sudwerkbrew.com.